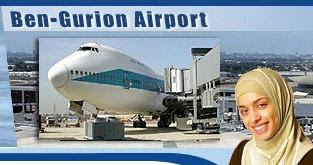 At Radio Bethlehem 2000: Our right to broadcast trumps air safety every time
that’s how well we were trained by Finland

Finnish State broadcastor YLE cries foul over Israel’s decision to close down Finnish funded radio station, in serial Israel critic, Sanna Negus’ report today on Finnish televison. According to the AFP, the reason Israel gave for confiscating the radio station’s equipment was due to their repeated violations of telecommunication regulations:
al-AFP: “An army spokesman told AFP that the decision to close the station was taken “by the ministry of telecommunications because transmissions were disrupting communications at Ben Gurion international airport” near Tel Aviv.”This radio station was closed several times in recent years for the same reason,” the spokesman said.”
So after repeatedly warning Radio Bethlehem 2000 to refrain from allowing their tower signal to confuse radio transmissions at the airport, the Israelis had to act against the station. The tone of YLE’s Sanna Negus report, is that she’s accusing Israel of violating freedom of the airways.
There’s really no way to come out smelling like a rose when it’s a radio station in question, but when looked at logically, there is no reason why the Israelis would do something like that, if it weren’t for the danger posed by the signal coming from the new tower. Two plus two equals four.
The real story here is, why weren’t these people better trained to run a station by the Finns that took on the project? It’s an embarressment for the Finnish government, that after sinking all the money into the training and operation of that station, they don’t yet know the responsibilities involved in adhering strictly to telecommunication guidlelines.
But,….YLE chose to make this a story about big bad Israelis who have nothing better to do than to make life difficult for others. Nonsense.
Israel seized radio station equipment funded by Finland

Sanna Negus: A functioning radio station in Bethlehem that is supported by Finland, is in difficulties. According to Israel Radio Bethlehem 2000 a new transmitter equipment disrupted air traffic and, therefore, the transmitter was confiscated. The radio station was not forewarned, but the army suddenly came to the place. Bethlehem 2000 radio broadcast news, current affairs and entertainment programs. Finland has supported the activities at the millennium, and many of its employees are trained by the Finns.The station is the oldest and most popular of Bethlehem, and wanted to extend the coverage area by acquiring new broadcasting equipment. This resulted in problems. – Our technicians were at the broadcast center, when the Israeli army military patrols came in and took everything we had there, presenter, Erica Zeidan, explains. According to the radio station equipment was tested and worked well. Personnel were not warned in advance, and the reason for the seizure of the equipment was not told. The station has not had similar problems throughout its 13-year operational period. Israel: Equipment may be returned According to Israel’s Communications Ministry of broadcasting the equipment disrupted air traffic. – It is possible that the equipment be returned. But it is clear that the transmitter that caused the disturbance is not working, because it sent the aviation traffic channels, “says Schubert Nati Israeli Communications Ministry. This is not the first time that a Palestinian radio station was closed for the same reason. Last year, two radio stations were closed down in Hebron and one in Ramallah. This time, the issue was related badly, as it would have been Israel’s West Bank civil administration responsibility to do so. -We are trying to contact the Israelis in order to get the equipment back, but they do not answer, and do not tell me why they did so. So we wait, Erica says Zeidan. Meanwhile, the radio station, is broadcasting on more than a decade-old equipment, to a smaller audience.

NOTE: Check out what Radio Bethelhem 2000 says about itself:”Radio Bethlehem 2000 (89.6 FM), was found in July 15, 1996 in the Holy City of Bethlehem where Jesus Christ was born. The aim was to create a radio station that would emerge with the new political reality of the Middle East as being the voice that promotes freedom, the democratic development of the Palestinian community in addition to being a voice for social justice and reconciliation. Radio Bethlehem 2000 was the first private radio station established by a group of young and energetic Palestinians from Bethlehem area with the sole interest of promoting and developing the local Palestinian community without being influenced by any political or ethnic group.Young journalists, social activists, community servants, etc, all joined together to make Radio Bethlehem 2000 a powerful voice to the local community, a voice that is heard daily by thousands of listeners in Bethlehem area and other areas in the Palestinian territories and some parts of Jordan and internationally across the world on www.radiobethlehem2000.net”Funny that they fail to mention that the “freedom, social justice, and reconciliation” that they strive for, has done absolutely nothing to stop the Muslim take over of the once Christian city. It’s been Muslimized, and I advise any Christian traveller to by-pass that city until Christians began to move back to the city in large numbers. Otherwise your just rewarding the jihad against them.