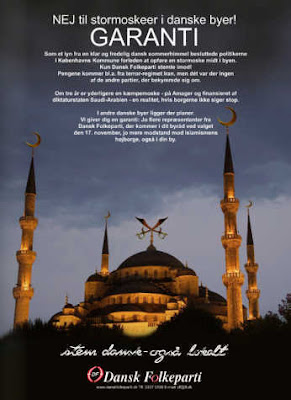 The Dansk Folkeparti (DPP) is running a major advertising campaign against mosques, here is the text to the ad being run, translated by Henrik Clausen, who adds: “This is a major change from the timid attitude DPP had at the previous local elections.” KGS

NO grand mosques in Danish cities!

GUARANTEE As a bolt from the blue and peaceful Danish summer sky, the politicians of the Copenhagen municipality decided the other day to erect a grand mosque in the middle of the city. Only the Danish Peoples’ Party voted against it! The money will, among other sources, come from the terrorist regime of Iran, but none of the other parties in the local government had any concern about that.

In three years another grand mosque – in the southern suburb of Amager and funded by money from the dictatorship of Saudi Arabia – will become reality if the citizens do not object.

In other Danish cities similar plans exist. We grant you this guarantee: The more representatives from the Danish Peoples Party elected at the local elections on November 17th, the greater the resistance against the Islamist strongholds, also in your city.

DF requires a referendum on mosques in Copenhagen. It is an inappropriate attempt to undermine religious freedom, says conservative mayor.
The Mayor of Copenhagen is shocked that the Danish People’s Party today have published advertisements in several dailies in which the party calls for a referendum on mosques in Copenhagen.
It happens after a majority of city hall on 27th of August, agreed to prepare a draft for a local plan for a mosque in Copenhagen’s northwest neighborhood. The DF was the only party that voted against it.
The conservative mayor of health and care, Mogens Lønborg, believes that the ad showing the blue mosque in Istanbul with the image of a manipulated sword at the dome, is inappropriate.
”I do not care about the campaign. We have freedom of religion in Denmark, and if you try to put obstacles in the way that Muslims gather in mosques, so I think it undermines religious freedom, ” he told MetroXpress.
Also the mayor for Technology and environment Klaus Bondam (Radikale Venstre – a moderate leftist party) objected to the ad.
“Danish People Party think they can get votes to run smear campaign against Muslims in this town. I am sure that most in Copenhagen, as I, will shake their head and flip past a lot of the ads, based on their policies of xenophobia and fear of the constitutional freedom of religion.” Several legal experts told MetroXpress that there are no legal problems to implement a referendum on mosques in Copenhagen.”