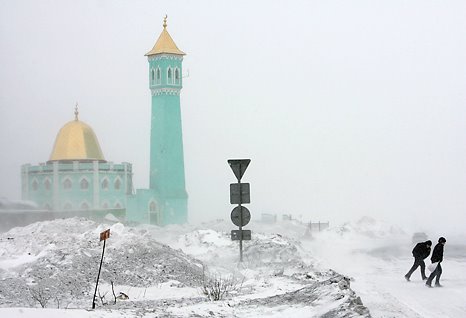 Slipping into the Ummah, one birth at a time

The Tundra Tabloids has taken notice of this development some time ago, of which the highly respected scholar of Islam, Dr.Daniel Pipes kindly gave due credit, but it’s nice to see the Finnish media finally catching up. If Russia doesn’t wake up soon, and jettison those Muslim areas it prizes, it will one day fall into the realm of Islam. KGS

Islam is the second largest religion in Russia

Religions in Russia increased dramatically after the collapse of atheistic Soviet Union. Support has contributed in particular to the rise of different protestant sects, such as Pentacostals and Baptists. Special cases are the apocalyptic groups. For example, a year ago, dozens of people who believe in the end times hid for months under ground in Central Russia.

The Orthodox Church in Russia is still the a beacon for the more established religion of life. It has virtually received a sovereign status, and the church leader, the Patriarch’s always being alongside that of the state leadership, is seen as an important sign of the times.

The main growing religious base of supporters, however, is the religion of Islam, which is already Russia’s second-largest religion. The reason is demographic: where the number of Slavic Russians is steadily decreasing, the Muslim population is growing.

It is estimated that if nothing changes, the Russian population may have a Muslim majority in about three decades. (MTV3 – STT)