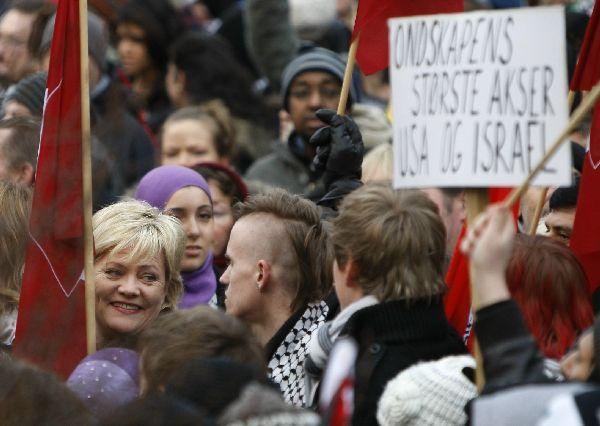 Kristin Halvorson: Anti-Israel who me?

(Halvorsen seen earlier this year smiling at anti-Israel rally while someone very close to her holds a sign reading: “The greatest axis of evil – USA and Israel.” )

That Norway has it in for the Jewish state, there is no doubt, they also have a problem with Jews successfully defending themselves against suicide/homicide Islam-O-kazis with the great help of the anti-terror barrier. Nordic politicians like, Kristin Halvorsen will never be seen offering any advice as to what measures they would approve the Israelis of using in defence of themselves, just on what they don’t approve of. It’s more easy for them to attack and condemn the Jews that way.

Those Norwegian politicians and pro-Arab advocates who personify such pickled-headed thinking aout Israel’s anti-terror barrier, have long abdecated their right to say anything at all, and everyone concerned would be better off, if they just shut their traps, dance around the May pole while eating their pickled herring and hunt their whales.

The Tundra Tabloids holds the Norwegian government in contempt for its continued anti-Israel bias, as well as for keeping Kristin Halvorsen as a Minister of Government, though she participated in a anti-Israel rally. KGS

The director general of the Foreign Ministry, Yossi Gal, on Thursday summoned the Norwegian ambassador to Israel, Jakken Bjørn Lian, to protest Norway’s decision to pull all of its investments from the Israeli arms firm Elbit. Following the meeting, the Foreign Ministry relayed that, “Israel will consider further steps of protest in the future.” Norway’s finance minister, Kristin Halvorsen, announced at a press conference in Oslo earlier in the day that the divestment was due to Elbit’s involvement in the construction of the West Bank separation fence.

According to a political source in Jerusalem, the Foreign Ministry had planned to issue a harsh statement of condemnation immediately after the announcement, but following the meeting with Lian the ministry decided to tone it down.

The explanations for the divestment provided by the Norwegian envoy at the meeting were apparently the reason for the ministry’s moderation of its response.

At the press conference, Halvorsen said the decision was based on the recommendation of Norway’s Ministry of Finance council on ethics, whose role is to ensure that government investments abroad meet ethical guidelines.

“We do not wish to fund companies that so directly contribute to violations of international humanitarian law,” said the minister. She said the shares were sold secretly ahead of the announcement.

Elbit manufactures a monitoring system installed on several parts of the separation fence.

The recommendation submitted by the Ministry of Finance council on ethics stated that it considered “the fund’s investment in Elbit to constitute an unacceptable risk of complicity in serious violations of fundamental ethical norms.”

The council is thus explicitly referring to a 2004 International Court of Justice ruling, stating that the separation fence represented a breach of international law

Israel erected the fence following a wave of Palestinian terror attacks at the height of the second intifada; it says the barrier is a necessary measure to stop Palestinian suicide bombers and protect settlers. The Palestinians oppose the fence’s route, saying it is designed to grab land they want for a future state.

Palestinian as well as Israeli anti-occupation groups, aided by Norwegian leftists, have all protested extensively against Norwegian involvement in companies involved in West Bank development and construction over last two years, which have seen an increase in Norway’s investment in Israeli firms.

A research project by the Coalition of Women for Peace called “Who profits from the occupation” found that almost two thirds of those firms are involved in West Bank construction and development.