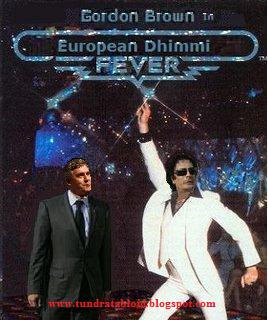 It’s what one is to expect when one gives in to the demands of terrorist loving states. Gordon Brown may deny that an”oil for terrorist” arrangement was behind the release of convicted mass murder, Abdul Baset Ali al-Megrahi, but he’s only fooling himself. KGS

Libya is set to flaunt the Lockerbie bomber’s release at the climax of today’s celebrations marking Colonel Muammar Gaddafi’s 40 years in power.

The Times gained access last night to the dress rehearsal of a spectacular two-hour show which extols Colonel Gaddafi for reviving his country and restoring Arab pride. As the finale approaches, the screen at the back of the giant stage in Tripoli’s Green Square shows Abdul Baset Ali al-Megrahi stepping off the plane which brought him home from his Scottish prison two weeks ago. His arms are raised aloft by Colonel Gaddafi’s son, Saif, as he acknowledges the joyful reception from the crowd below.

Unless it is cut out at the last minute, the clip’s inclusion seems almost calculated to provoke the West. Britain and America had urged Libya to keep al-Megrahi’s homecoming low key, and President Obama and Gordon Brown both expressed disgust when he was given what appeared to be a rapturous welcome at Tripoli airport. It also flies in the face of repeated assurances by Libyan officials, including Saif Gaddafi, that the reception was muted and not intended as a display of gloating. Al-Megrahi himself is now in hospital, seriously ill with prostate cancer.

Anxious to dampen down the controversy caused by al-Megrahi’s release, Britain is expected to send only a junior representative to today’s ceremonies. The British Embassy in Tripoli said that Sir Vincent Fean, the ambassador, was in Malta, suggesting the job will be left to a more junior diplomat. “We are still considering the level of representation,” a spokesman said.