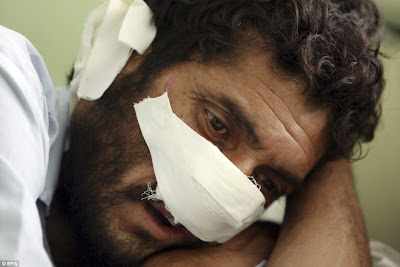 ”I regret very much getting the card and going to vote”

And to think that many on the Left would have chosen to allow the Taliban to remain the de facto rulers of Afghan society. That’s why many were against the US helping the Northern Alliance to rid their territory of the Taliban, shortly after 9/11.

This is the kind of brutal treatment that awaits many an Afghan if the Taliban are ever allowed to reclaim lost territory. It comes down to the human issue of it all, how in the name of reason and common sense can anyone allow these people to be subjected, again, to such atrocities in this modern age?
While the Tundra Tabloids holds no fanciful illusions of what kind of democracy is in place right now, and that the Afghan government is finding it hard not to placate the locals with the allowing of sharia to be administered in their towns and villages scattered across that country, the Taliban simply cannot be allowed to return to power.
H/T: GAIA
The man who had his nose and ears cut off
by the Taliban for daring to vote

Lal Mohammad was determined to stand against Taliban threats and exercise his right to vote in Afghanistan’s presidential election.

But he now regrets his defiance.

These horrifying pictures show a fearful Mohammad recovering after he was ambushed by Taliban fighters as he walked to a polling station last week.

The 40-year-old farmer was beaten and mutilated. The Taliban cut off his ears and part of his nose in the shocking attack.

The Taliban vowed to disrupt the August 20 vote, threatening reprisals against voters and staging scores of rocket attacks and several bombings across the country on election day.

The threats and violence failed to stop the election from taking place, but they do seem to have hurt turnout in some areas, especially the Taliban heartland in the south.

Mohammad was in pain and in tears as he gave the gruesome account of his ordeal.

He described how militants stopped and searched him while he was on his way to a polling booth. They beat him with the butt of an assault rifle after they found his voting card.

Then they took out a knife.

‘I saw one reaching my nose with a knife. I asked him to stop, but it was useless,’ Mohammad said.

‘I regret very much getting the card and going to vote.