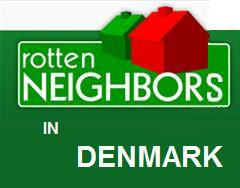 Political Correctness demands that the 23 other normal families to either accommodate the one rotten family, or move out in mass. Perhaps they are making things intolerable for the rest of the apt.building dwellers in order to make room for all of their relatives and friends. KGS
H/T: Vlad Tepes
Neighbours turn nasty

A tiff between neighbours has turned into a horror movie for 23 families who face being moved out of an apartment building in Helsingør due to the aggressive behaviour of one other family.

Life has reportedly been hell for the 23 families since the family in question moved into Lejerbo housing association’s Unit 32 rental flats on Belvederevej last October. The residents have allegedly faced harassment, violence and threats from the family on a daily basis.

The conflict peaked on Monday while the family accused of the rotten behaviour was entertaining relatives. Their children reportedly began throwing rocks and spitting at other families in the building’s playground area. When they were told to stop, their parents came down to the playground armed with knives and clubs.

A melee ensued and two residents were injured and taken to hospital, while one man was arrested.

Threats have since followed the incident, including the Lebanese family spray painting, ‘We’ve killed a man. Watch your step. Ha ha!’ on the sidewalk outside the building.

But instead of the aggressive family being forced to move out, Lejerbo housing association has instead volunteered to relocate the other families at no charge. The reason is that the one family cannot be evicted until the matter is settled through a court order.

Birgitte Wittendorff, head of Helsingør’s social services department, said the city did not have the power to negotiate solutions in household or neighbour disputes. But the city would step in and evict the family as soon as it had the legal means to do so.

The 23 families previously filed their case with the Tenant Complaints Board and the family was ‘evicted’ by the board – a decision that must be upheld in the court before it can be actualised.

In the meantime, many of the building’s residents were reportedly living in fear, especially those who testifying in the eviction case.

Lejerbo’s attorney said he was trying to get the case heard in the courts as soon as possible, but that could take weeks or even months.

The association’s Steffen Boel Jørgensen said it was ‘ridiculous that the 23 families had to move, but tenants were calling up and they had been forced out of their apartment to seek refuge with family and friends.