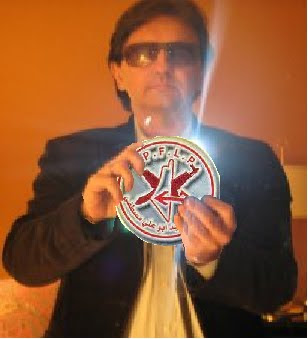 When I write blood libels, I make sure that
only terrorists are my sources, …like the PFLP!

So the Aftonbladet’s ace free lancer is now getting support from the socialist/terrorist group, the Popular Front for the Liberation of Palestine. Boström should feel mighty ashamed of himself for not only spreading a blood libel against Jews, but also for being bestowed with the grand dishonor (that only the Crem de la Creme of European stoogery could be involve in) of being praised by a terror organization for the “good work he’s doing.”

Anti-Semites and stooges like Aftonbladet’s, Donald Boström however, will not be ashamed for being praised by such people, they’ll take it instead as badge of honor, and as a chance to get the “next big scoop that comes around”. Rest assured, we have not heard the last of Boström, he’s probably helping the PFLP with their demands in his next libel article. KGS

Gaza – Ma’an – International human rights organizations must carry out a serious and immediate investigation on media reports published by a Swedish newspaper alleging Israeli forces harvested organs from Palestinian youth, the Popular Front for the Liberation of Palestine demanded Saturday.

The report in Aftonbladet quoted Palestinians claiming Israeli soldiers detained young men who died in custody, and alleged their bodies were returned with organs missing. A PFLP statement said such reports, given the detailed names, dates and photographs included and the staunch support of the Swedish government of the reporter, must be taken seriously.

The group said the story was similar to alleged violations carried out by soldiers in the 1980s in Gaza, where they were said to have stolen organs from children taken to Israeli hospitals. The party praised the work of correspondent Donald Boström and all those who facilitated his reporting. The PFLP reiterated its call for the need to bring Israeli soldiers to justice for their actions.