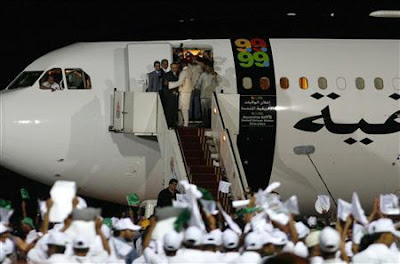 The total nonsense and folly of letting this guy out early will be seen in the years to come, as the deterrent of serving “the full cake” of a prison term can now been reduced by how much a state can win financial deals with the Islamic terrorist’s homeland. Debbie Schlussel has this to say about the terrorist and his connections with the bombing and Palestinian Fakestinian involvement:

You’ve probably read or heard on TV News about the outrageous release of Abdel Basset Ali al-Megrahi–convicted in the 1988 Islamic terrorist bombing of Pan Am 103 over Lockerbie, Scotland–to a hero’s welcome in Libya. I don’t blame most of the families for being upset. […] Though not reported in any of the coverage of the Megrahi release, the bombing of Pan Am 103 was planned and begun by the Popular Front for the Liberation of Palestine-General Command. And a Dearborn Shi’ite Muslim drug dealer who was on the plane was thought to have been involved in the bombing, using explosives in his Walkman. So, I can understand why some believe that al-Megrahi was wrongly convicted. I don’t share that belief (because strong evidence ties him to the bombing), but I know that only one person got the blame for something a deceased guy in Dearborn was involved in.

LONDON/WASHINGTON (Reuters) – The United States and Britain on Friday condemned a “hero’s welcome” given to the newly released Lockerbie bomber, with London scrambling to stem fallout from the decision to free him on humanitarian grounds.

Former Libyan agent Abdel Basset al-Megrahi was serving a life sentence as the only person convicted of bombing Pan Am flight 103 over the Scottish town of Lockerbie which killed 270 people — 189 of them American.

Hundreds of young Libyans gathered at an airport in Tripoli to welcome Megrahi home on Thursday and cheered and waved national flags as his car sped away. Large public gatherings are rare and are usually tightly controlled in Libya.

“I think it was highly objectionable,” U.S. President Barack Obama told reporters at the White House, referring to the welcome Megrahi received.

“It is disturbing to see images suggesting that Megrahi was accorded a hero’s welcome instead of being treated as a convicted murderer,” said White House spokesman Bill Burton.

The United States government and relatives of victims of the bombing had condemned the decision by Scotland’s regional administration to release Megrahi, who is dying from cancer.

Some Scottish families of victims had supported the release and some have questioned whether Megrahi was ever involved in the bombing.

British government ministers, wary of upsetting one of its strongest international allies, came out in force on Friday to criticize the way Libya had handled Megrahi’s return.

“How the Libyan government handles itself in the next few days will be very significant in the way the world views Libya’s re-entry into the civilized community of nations,” foreign minister David Miliband said.

Prime Minister Gordon Brown had written to Libyan leader Muammar Gaddafi on Thursday to ask for the homecoming to be handled with sensitivity.

The White House had called for him to be placed under house arrest, and officials said on Friday the United States would be watching the Libyan’s government’s actions going forward.

“Celebrating this man who was convicted in a court of law as a terrorist would of course cause us to question that indeed they do want to move to a new phase in our relationship,” U.S. State Department spokesman Ian Kelly said, referring to Libya.