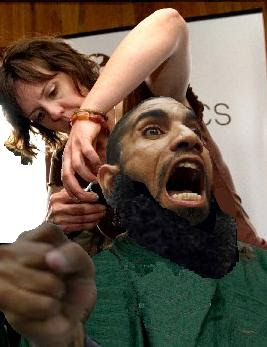 Oh how easy it is to predict how the media will treat such instances. Any violence committed by a Muslim, is treated as a mental illness, not as a symptom of Islam. In part, they have it right, believing in the traditional precepts of Islam, can make the true follower crazy.
But the problem with the media’s handling of these situations is the denying of the “root cause” (heh…thanks Vlad) for the violence, which is none other than the words and deeds attributed to the mad prophet of Islam, Mohamed, who is believed by many to have existed. KGS

A Disturbed man has targeted beauty salons in Jette
The police in Jette arrested a mentally disturbed 30-year-old man who had targeted a few beauty salons on West Charles Avenue. The man was in and out of different salons while reciting verses from the Koran. In the last room he suddenly grabbed a table and a chair and threw it at the mangeress.
The police had arrested him later. He appeared very confused and in his interrogation the man said that he was sent by Allah to women who wear makeup and do not respect the penalties of the Koran. After consultation with the Brussels public prosecutor, the man transferred to the psychiatric department of a nearby hospital. (belga/bdr) (belga / BDR)