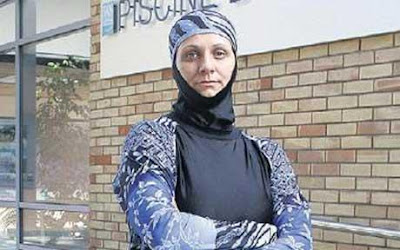 Convert Carol in France: I should move to S.London

Oh Britannia! The insane are running the asylum in S.London! The complete and utter fools in charge of the Croydon council, may be well meaning fools, but they are fools nonetheless. The folly of it all, demanding non-Muslims to cover up!
But hey, Finland has Muslim only swimming periods as well, but this is the first time the TT has heard of a public swimming hall demanding that its non-Muslims to “cover-up” or they’re banned from swimming. Personally, the TT wouldn’t get into a pool where people were wearing full length clothes due to the hygiene problem. Unbelievable. KGS
H/T: Vlad Tepes

Swimmers are told to wear burkinis

Under the rules, swimmers – including non-Muslims – are barred from entering the pool in normal swimming attire. Instead they are told that they must comply with the “modest” code of dress required by Islamic custom, with women covered from the neck to the ankles and men, who swim separately, covered from the navel to the knees.

The phenomenon runs counter to developments in France, where last week a woman was evicted from a public pool for wearing a burkini – the headscarf, tunic and trouser outfit which allows Muslim women to preserve their modesty in the water.

The 35-year-old, named only as Carole, is threatening legal action after she was told by pool officials in Emerainville, east of Paris, that she could not wear the outfit on hygiene grounds.

But across the UK municipal pools are holding swimming sessions specifically aimed at Muslims, in some case imposing strict dress codes.

Swimmers were told last week on the centre’s website that “during special Muslim sessions male costumes must cover the body from the navel to the knee and females must be covered from the neck to the ankles and wrists”.

There are similar rules at Scunthorpe Leisure Centre, in North Lincolnshire, where “users must follow the required dress code for this session (T-shirts and shorts/leggings that cover below the knee)”.

In Glasgow, a men-only swimming session is organised by a local mosque group at North Woodside Leisure Centre, at which swimmers must be covered from navel to knee.

At a women-only class organised by a Muslim teacher at Blackbird Leys Swimming Pool, Oxford, to encourage Muslim women to learn to swim, most participants wear “modest” outfits although normal costumes are permitted.

The dress codes have provoked an angry reaction among critics who say they encourage division and resentment between Muslims and non-Muslims, putting strain on social cohesion.

Ian Cawsey, the Labour MP for the North Lincolnshire constituency of Brigg and Goole, said: “Of course swimming pools have basic codes of dress but it should not go beyond that.

“I don’t think that in a local authority pool I should have to wear a particular type of clothes for the benefit of someone else. That’s not integration or cohesion.”

Labour MP Anne Cryer, whose Keighley, West Yorkshire constituency has a large number of Muslims, said: “Unfortunately this kind of thing has a negative impact on community relations.

“It’s seen as yet another demand for special treatment. I can’t see why special clothing is needed for what is a single-sex session.”

Muslim swimming sessions are also held at a number of state schools around the country. At Loxford School in Ilford, east London, a local Muslim group organises weekly sessions for Muslim men, with the warning that “it is compulsory for the body to be covered between the navel and the knees.

“Anyone not adhering to the dress code or rules within the pool will not be allowed to swim”.

The practice of holding special Muslim swimming sessions has led to non-Muslims being turned away.

David Toube, 39 and his five year old son Harry were last year refused entry to Clissold Leisure Centre, in Hackney, east London, after being told the Sunday morning swimming session was for Muslim men only.

Council officials later said staff had made a mistake and both Mr Toube, a corporate lawyer, and his son should have been admitted.

After discovering the rules at Thornton Heath one Croydon resident, 34-year-old Alex Craig, said: “I think it is preposterous that a council should be encouraging this type of segregation over municipal facilities.

“Surely if Muslims want to swim then they should just turn up with their modest swimwear at the same time as everyone else.”

Douglas Murray, director of the Centre for Social Cohesion, last night condemned the practice. He said: “This kind of thing is extremely divisive.

“Non-Muslims see these extremist demands as an example of Muslims wanting things to fit into their lifestyle, when there aren’t similar things organised for Hindus, Buddhists or Jews.

“It also puts moderate Muslims in an awkward position as it suggests, wrongly, that they are not devout enough, simply because they choose not to cover themselves in a shroud in a pool.”

A press officer at Croydon council, which introduced Muslim-only swimming in 2006, claimed that the wording on the website was a mistake and the dress code should be regarded as a suggestion rather than a requirement.

The website was late changed to remove the reference to the dress code.

However, an official at the leisure centre said the dress code remained compulsory.