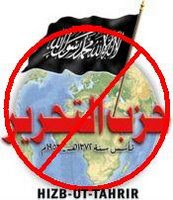 Another reason why the “Stealth Jihad” in the long run, is far more dangerous to those of us in the free world, than al-Qaida’s “Violent Jihad” ever will be. It’s two sides of the same totalitarian coin, and the game plan the Muslim Brotherhood in both Europe and in the US has been quietly putting into play for some time now.Outside of limiting the violent jihadis from practicing their trade inside Europe and the US, the soft jihadis, the practitioners of the Stealth Jihad, pose the greatest threat to our national security and democratic liberties. Hizb-ut-Tahrir had a major jamboree in Chicago to help kick start a major campaign to win American recruits.US officials should have banned the group entry into the US, but they were allowed nonetheless, to proceed unperturbed in spreading their message of subversion and contempt of liberal democracies in the city of Chicago. The leaders of the Hib-ut-Tahrir movement were clearly on record for being in favor of the supplanting of the US Constitution with Islamic Sharia, a clear violation of US law. How long will the buffoonery last is anyone’s guess, but there is more than enough information on this nefaroius organization to warrant a ban on its activities inside the US. KGSVia: Rantburg

Ma’an — The Hizb Ut-Tahrir (Party of Liberation) on Sunday condemned Friday’s bloodshed in the Gaza Strip as immoral and illegal, according to a statement sent to Ma’an.

The pan-Islamist party, which seeks the establishment of an Islamic caliphate through peaceful means, rejected the declaration by radicals declaring Gaza an “Islamic emirate.”

“Killing and fighting will never be a legal means of establishing an Islamic emirate,” Hizb Ut-Tahrir insisted, condemning the bloodshed on Thursday that it said was caused by the declaration from Jund Ansar Allah, a group thought to be ideologically aligned with Al-Qaeda.

Most Palestinian groups and parties, including Hamas, are national liberation movements very much opposed to radical organizations such as Al-Qaeda, which seek to instate Islamic rule on what they see as Islamic land. [TT: False, see below]

Hizb Ut-Tahrir’s aims are similar to Al-Qaeda’s, except that the movement exclusively advocates nonviolent struggle to establish the Islamic nation. The party has a relatively small following since it recognizes neither the legitimacy of the Palestinian Authority nor the Hamas-ruled de facto government in the West Bank.

However Hizb Ut-Tahrir is comparatively much more mainstream than the relatively new Jund Ansar Allah, a violent extremist group that boldly took on Hamas’ authority with armed members barricading themselves inside a mosque and declaring Gaza’s de facto government illegitimate.

The defiance led to an unprecedented crackdown on the part of Hamas and its militant wing, the Al-Qassam Brigades, which stormed the mosque late Friday and killed a dozen Jund Ansar Allah loyalists by Saturday morning. Six civilians also died in the operation, as well as six members of Hamas’ forces.

Hizb Ut-Tahrir called on both sides to reject violence in the name of any authority, Islamic or secular, saying it would be impossible to declare either under the present Israeli occupation. “Those who rule have sovereignty dependent on what the occupation allows, and thus it is not possible to declare an Islamic emirate in a country under occupation.”

NOTE: Hamas is not a nationalistic group. They are fighting Israel for the glory of Islam and the whole Ummah, or the Muslim nation. The only reason they have a beef with Al-Qaida is due to a power struggle, of who is in control if what. It’s also a means to not distance themselves too much from their Western lackeys in Europe and in the US Democratic party.To be linked with al-Qaida would spell trouble for Hamas, though their patry’s charter is built according to Al-Qaida’s Islamic principles.