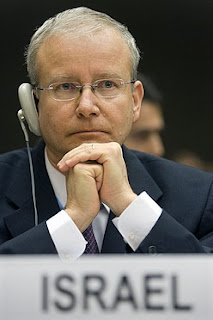 Aharon Leshno Yaar, Israel’s ambassador to the UN: Now how about issuing a report that doesn’t use solely anti-Israel sources

He spoke with The Jerusalem Post by phone, a day after UN High Commissioner for Human Rights Navi Pillay submitted a report on what she termed “grave violations of human rights in the Occupied Palestinian Territory, particularly due to the recent Israeli military attacks against the occupied Gaza Strip.”

Her 34-page report was created at the request of the Human Rights Council in a special session it held on Israel in January.

The report will be presented to the council on September 29, along with a separate report that is being compiled by South African jurist Richard Goldstone.

Leshno Yaar said Pillay’s report was “written by Palestinians in Ramallah” and “screened by Palestinian lawyers in Geneva in order to satisfy Palestinian diplomats on the Human Rights Council.”

It was “totally biased” and based on unsubstantiated information, he said. “It ignores the facts and the Israeli positions.”

“As far as Israel is concerned, we trust our military, we trust our legal system and we are ignoring this report,” Leshno Yaar said.

In her report, Pillay said, “There is significant evidence which indicates that serious violations of international humanitarian law, as well as gross human rights violations occurred during the the military operations of 27 December 2008 to 18 January 2009.”

She also accused Israel of harming unarmed civilians and of violating the rules of war with its “blockade” of the Gaza Strip.

Israel can expect the very same kind of “justice” from these international organizations (UN) that Navi Pillay heads, that a black African American could expect from a court in a segregated South in the US.
Pillay does not know international law, there is not one thing she is blaming Israel for that could be proven correct in a valid (just) court of law, nothing. She is just mouthing off anti-Israel talking points taken from her Arab handlers that controls various UN organizational bodies through the Organization of the Islamic Conference (OIC).

International law expert, Justus Reid Weiner: “Article 23 of the Fourth Geneva Convention requires parties to certain conflictsto permit transit to enemy civilian populations of a limited number of items andunder a limited set of conditions.
107 However, the fighting in and around the Gaza Strip is not a conflict covered by the Fourth Geneva Convention: the conflict is not one between state parties to the Convention, and Gaza is not occupied territory.108
Therefore, Israel is not bound by Article 23.
Even if it were bound by the Fourth Geneva Convention, Israel would be acting in full
compliance with international law. Article 23 of the Fourth Geneva Convention permits states such as Israel to cut off fuel supplies and electricity to territories such as Gaza.”
Article 23 only requires a party to permit passage of food, clothing and medicines intended for children under fifteen, expectant mothers and maternity cases. 109 Were Article 23 to apply, Israel would still be under no obligation to permit the passage of electricity, fuelor any items other than food, clothing or medicine.
Moreover, under Article 23, Israel would be under no obligation to provide anything itself; Israel would only be required not to interfere with consignments of food and so forth sent by others for the benefit of children under age fifteen, mothers of newborns and pregnant women.110
Even if it were bound by the Fourth Geneva Convention, Israel would be acting in full compliance with international law.
Finally, under Article 23, a party can block passage even of food, clothing and medicine even for these population groups if it has serious grounds for suspecting that the items will be intercepted before reaching their destination or that the items may benefit the enemy’s economy by substitution.111
Israel has excellent grounds for fearing both of these results, especially after Hamas seized fourteen Red Crescent trucks carrying humanitarian aid on February 7, 2008, on the pretext that only Hamas may decide how to distribute aid in Gaza (Hamas redistributed the food products and medical supplies to Hamas-run ministries).112
Additionally, critics of Israel tend to ignore Hamas’ continued mismanagement of the
aid and fuel supplies that it does receive. Hamas misuses some of the fuel that Israel
supplies to it. The fuel is not only used to power factories manufacturing projectiles,113 but is also used, for example, to illuminate the underground tunnels which are used to smuggle in weaponry from Egyptian Sinai. These misuses of Israeli-supplied fuel then target Israeli residential, commercial and industrial areas.114
The IDF even caught terrorists attempting to smuggle potassium nitrate – which is used to manufacture explosives and Qassam rockets – into Gaza in large sacks labeled as EU humanitarian aid: the sacks were branded “EEC 2 Sugar Exported From EU.”115
108 Geneva Convention IV, Article 2.
109 Geneva Convention IV, Article 92.
110 Id.
111 Id.
112 “Hamas Seizes Convoy of Food Meant for Palestinian Red Crescent,” Jerusalem Post, February 7, 2008,
//www.jpost.com/servlet/Satellite?cid=1202246347331&pagename=JPost%2FJPArticle%2FShowFull.
113 Rebecca Anna Stoil, Sheera Claire Frenkel and JPost.com Staff, “Senior Official: Iran Behind Rocket Fire,” Jerusalem Post, March 3, 2008,
//www.jpost.com/servlet/Satellite?pagename=JPost%2FJPArticle%2FShowFull&cid=1204546390634.
114 Matthew Levitt, “Hamas’ Hidden Economy,” Los Angeles Times, July 3, 2007, at 19.
115 Herb Keinon, “EU Slams Terrorists’ Use of Phony Sugar Sacks,” Jerusalem Post, December 30, 2007,
//www.jpost.com/servlet/Satellite?cid=1198517245928&pagename=JPost%2FJPArticle%2FPrinter

In other words, the international media that swallows whole the garbage UN officials like, Navi Pillay dishes out, should do their homework and figure out for themselves what is legal under international law and what is not, then report the truth accordingly. But guess what folks, they don’t, and the Arabs trust in the fact that these vampires will continue to refuse to do their homework, and so the conflict continues, because Hamas and Fattah KNOW they can trust that the international media (as a whole) will repeat their talking points time and again. KGS