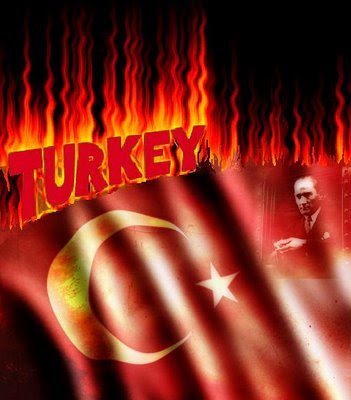 The EU Enlargement Commision headed by Finnish EU bureaucrat, Olli Rehn, has never (to my knowledge) ever mentioned Turkish anti-Semitism as being a negative quality that would disqualify them from EU membership. Here’s just another reason why Turkey shouldn’t be allowed to join the EU. Europe doesn’t need to revitalize it’s own home grown version of the same madness, any more than it needs to be Islamized.
Present-Day Anti-Semitism in Turkey

One of the most illuminating methods of explaining and accurately describing present-day Turkish anti-Semitism and the reasons for its widespread nature is to examine the reactions among Turkish intellectuals and the Turkish press to various Israeli military actions in recent years. Surveying articles by Turkish columnists during Israel’s most recent military operations, the summer 2006 war with Hizballah in Lebanon and the more recent Operation Cast Lead against Hamas in Gaza, will shed light in this regard.[1] Particularly significant are those columnists who are considered opinion leaders, some of whom are academics as well. Understanding the reactions of these opinion makers, however, requires an overview of the attitudes of much of the Turkish intelligentsia toward what is known as the “Palestine question.”

The Nationalists and Neonationalists Anti-Semitism in Turkey is encountered not only among the Islamists and leftists but also among the nationalist and neonationalist[20] streams, which in recent years have declared their hostility to the European Union, the United States, and Israel. The anti-Semitism in this camp stems mainly from the popularity that Mein Kampf enjoys among its members as an “ideological handbook.”[21] The Turkish translation of Mein Kampf has indeed become a bestseller in the country and can be purchased in some of the largest supermarket chains and bookstores.[22]