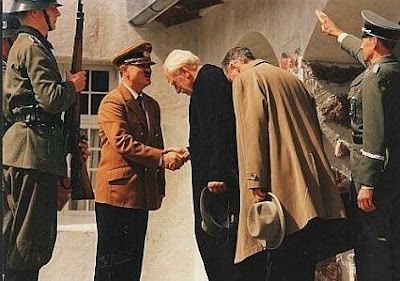 Scene from ‘Hamsun’, 1996, with
Max Von Sydow as Knut HamsunNor has Norway a problem
with Holocaust inverter

Trine LillengTrine Lilleng is still working for the Norwegian embassy in Riyadh, a fact which runs contrary to the statement by the Norwegian Foreign Minister, Jonas Gahr Store, in February that Lilleng was “no longer working in Riyadh.” Lilleng became the focus of international interest after she equated in an email, Israeli policy with that of the Nazis, something of which by the way, falls under the EU’s own working definition of anti-Semitism.She’s not the first person working for a Nordic Foreign Ministry to involve themselves in such a stupid anti-Semitic act, former Finnish Foreign Minister, Erkki Tuomioja did the exact same thing, twice, in interviews with the highly overrated Finnish weekly magazine, Suomen Kuvalehti.The Haaretz reports that, in spite of assurance given by the Norwegian Foreign Minister that Lilleng was transfered from her position, the Israeli newspaper has learned that she is still working Riyadh, and possibily has been given a promotion. That the Norwegians continue to behave in such a manner underlines their stonewalling and digging in of the heel-like attitude, where the Knut Hamsun affair is concerned. The whole situation stinks.The Tundra Tabloids believes that Dr.Manfred Gerstenfeld, Chairman for the Jerusalem Center of Public Affairs was right in stating that:”The Norwegians thought that they were smart and criticized Knut Hamsum, in that way they mobilized other countries to support them as chair of the ITF. I pointed out at the time that the Hamsun affair was only the tip of the iceberg of why Norway shouldn’t chair the ITF.”In Dr.Gerstenfeld’s recent essay on Norwegian anti-Semitism and anti-Israelism, he wrote:When Stoere came to Israel a few weeks later he was interviewed by the daily Maariv. He mentioned that Lilleng was no longer in Riyadh. The interviewer should have clarified whether she was still employed by the ministry. During the interview Stoere returned to his frequent accusations that Israel acted disproportionately and that one has to talk to Hamas.[i] I cannot understand how you can an employ a Holocaust distorter and at the same time want to chair the Holocaust Education and Remembrance efforts… There are many other reasons as well why Norway is not fit to chair this task force.”In Dr.Gerstenfeld’s book, Behind the Humanitarian Mask” (viewable in pdf form), he wrote: “In March 2007 the Holocaust inverting cartoonist Fin Graff was knighted by the king himself in the Royal Norwegian Order of St. Olav ” (See page 53 of the book. Graff had drawn Prime Minister Olmert as a Nazi.) KGSDid Norway promote a diplomat who compared Israelis to Nazis?

A first secretary in Norway’s embassy in Riyadh who compared Israelis to Nazis will return to Oslo next month with the title of Consul, after completing her posting, Haaretz has learned. This contrasts with assurances by Norway’s foreign minister that the diplomat had been recalled. In January Trine Lilleng, then described by her foreign ministry as first secretary, sent an email through her official foreign ministry account with images of slain children said to have been killed in the Israeli attack on Hamas in Gaza, juxtaposed with photos of Jewish Holocaust victims in seemingly correlating situations. In the mail, she wrote: “I always wondered why they didn’t learn anything from the horror during WWII. Now I see what they learnt [mistake in original text].” As reported by Haaretz, the mail prompted opposition politicians to demand she be rebuked or recalled.

But an embassy employee told Haaretz two weeks ago that Lilleng was “sitting by her desk.” The employee said Lilleng was a consul.

This does not represent a promotion, according to Ragnhild Imerslund, spokeswoman in the Norwegian Ministry of Foreign Affairs. “The title depends on the functions of the person in the actual position at the embassy. Ms Lilleng has been First Secretary … In executing her consular duties she may use the title Consul.”

But after Norwegian media reported about Lilleng’s Holocaust inversion in January, the ministry emphasized that she belonged to the administrative staff as opposed to the diplomatic staff, according to Per Antonsen, a former veteran consultant on foreign policy to the Norwegian government.

“I doubt whether this would be considered a formal promotion, but it isn’t the opposite either,” he told Haaretz.

Commenting about Lilleng’s actions, Imerslund said: “Ms. Lilleng voiced her personal opinion and in no case did she express the opinion of the – Norwegian government. The Ministry of Foreign Affairs – deeply deplores [these] views and comparisons.”

When queried about steps to reprimand Lilleng, Imerslund replied that the ministry “will not comment on personnel matters related to individual staff,” but added “the matter has been dealt with internally.” She also said that Lilleng’s assignment in Riyadh will expire in August.

This contrasts with Norwegian Foreign Minister Jonas Gahr Store’s statement in an interview with Maariv in February that Lilleng was “no longer working in Riyadh.”