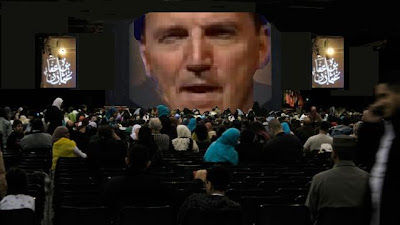 UK Liberal Democrat MP, Simon Hughes: I want those would stone me, to lead meThe Tundra Tabloids found out that there was much much more to the speech MP Simon Hughes gave at the Global Peace and Unity Event on October 25th, 2008. The Baron already has a post up about it while the TT was busy with the photoshop of the pandering politician. KGS

Baron Bodissey:Mr. Hughes is gay, and homosexuality was an issue when he was first elected to Parliament. Funnily enough, it wasn’t his own sexual orientation that caused controversy, but that of his opponent. From the wiki on him:The by-election was described by Gay News as “the dirtiest and most notorious by-election in British political history” because of the slurs against the character of the Labour candidate and gay rights campaigner Peter Tatchell by various opposition campaigners. The Liberal Campaign leaflet described the election as a “straight choice”, a standard campaigning slogan which was open to misinterpretation. Hughes won the seat with 57.7% of the vote. He apologised for the campaign in 2006, during the same few days revealing his own homosexual experiences, and confirming that he is bisexual after being outed by The Sun newspaper.And this is the man who is now pandering so shamelessly to the local British representatives of the Ummah…You’ll notice that Mr. Hughes opens his address with “salaam aleikum”, the standard Muslim-to-Muslim greeting. He then quotes from Sura 45 and other parts of the Koran. The Hon. MP may want to meditate on another part of Sura 45, namely verses 7-11:Woe to each sinful dealer in Falsehoods:He hears the Signs of Allah rehearsed to him, yet is obstinate and lofty, as if he had not heard them: then announce to him a Penalty Grievous!And when he learns something of Our Signs, he takes them in jest: for such there will be a humiliating Penalty.In front of them is Hell: and of no profit to them is anything they may have earned, nor any protectors they may have taken to themselves besides Allah: for them is a tremendous Penalty.This is (true) Guidance and for those who reject the Signs of their Lord, is a grievous Penalty of abomination.Read it all here.

Simon Hughes, at the Global Peace and Unity Event on October 25th, 2008