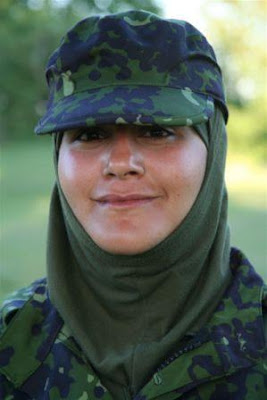 Maria Mawla:
Green and Islam are a perfect match,
besides, I demand to be accommodated !

It’s a great development but it’s not over yet folks, there are still enough doughy-headed officials left, to make the wearing of the scarf….a Muslim right. It wouldn’t surprise the TT one bit if that were to happen, though it shouldn’t. The wearing of a scarf, outside of the conflict between religion and secularism, is a hazard for any military personnel.
No matter how you slice it, the wearing of a scarf prohibits the vision of the person wearing, thus possibly endangering fellow soldiers. It also throws out the window the concept of uniformity within the armed forces. But Islam demands others to accommodate it’s restrictions and way of life, so I don’t see this ending any time soon. KGS
Home Guard does about face on headscarves

The Home Guard was forced to publicly announce a ban on headscarves this weekend, after it emerged that a Muslim volunteer had carried out her training exercises wearing one.

Maria Mawla and her camouflage headscarf were featured in one of the Home Guard’s own news articles. That article has since been removed from the guard’s website.

Ulrik Kragh, MP for the Danish People’s Party and head of the Home Guard Committee, underscored that uniform guidelines have to be upheld and that Mawla will be expelled from the guard if she refuses to remove the headscarf while at the training camp.
Kragh that while he was pleased to see Muslims aking an interest in the Home Guard, headscarves are incompatible with official military approved uniforms.

‘It was an error that the woman in question was allowed to conduct her courses wearing a headscarf,’ he stated on the Home Guard website. ‘Uniform regulations apply to all guard members, primarily for security reasons.’

But Kragh was contradicted by his own party’s defence spokesman, Karsten Nonbo, who said that as long as the headscarf was in keeping with the uniform’s design and colours, he could see no reason Mawla should not be allowed to wear it.

Should the issue not be sufficiently resolved, the Danish People’s Party has requested the matter be put before Defence Minister Søren Gade for a final decision.