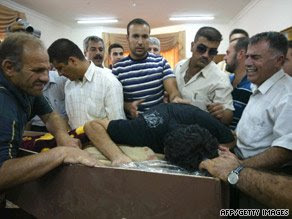 ” George said he is concerned about the church bombings.
If this continues, he said, “there will be no Christians left in Iraq.”Harsh words you might think? The Tundra Tabloids thinks not, the Muslims murdering Christians point to their Koran as the over authority for what they are doing against the non-believer, so in their opinion, they are not guilty of “murdering innocents”. KGSH/T: Vlad Tepes4 killed, 32 wounded as 6 Baghdad churches bombed

BAGHDAD, Iraq (CNN) — At least four people were killed and 32 wounded as six Baghdad-area churches were bombed within 24 hours, officials told CNN.The first bombing took place Saturday night at St. Joseph’s church in western Baghdad, according to an Interior Ministry official. Two bombs placed inside the church exploded at about 10 p.m. No one was in the church at the time of the attack.Sunday afternoon, three bombs exploded outside churches, wounding eight civilians, the official said. The bombs detonated within a 15-minute span, between 4:30 and 4:45 p.m. Two of the churches are in central Baghdad’s al-Karrada district, and the third is in al-Ghadeer in eastern Baghdad.Sunday evening, a car bomb exploded outside a church on Palestine Street in eastern Baghdad just after 7 p.m., the official said. Four people died, and 21 were wounded.And in southern Baghdad’s Dora district, a bomb outside a church wounded three other civilians.
Most of the churches were damaged in the bombings, according to video footage.