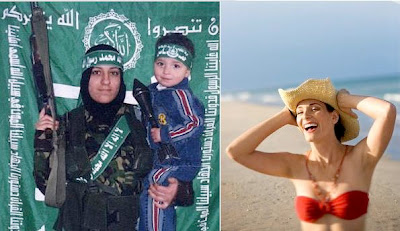 Hamas: It’s ok to be like this, ………….but not like this
Hamas is the Taliban and Al-Qaida all rolled up into one. When murder and mayhem are not currently on their minds, they’re corralling women and forcing them to behave in a more Islamic way, which means no laughing and covering themselves up. Islam = oppression. ‘They accused me of laughing in public’

A Palestinian Fakestinian female journalist complained over the weekend that Hamas policemen attempted to arrest her under the pretext that she came to a Gaza beach dressed immodestly and was seen laughing in public.The journalist, Asma al-Ghul, said that the policemen instead confiscated her passport. Since the incident, she added, she has been afraid to leave her home, especially after receiving death threats from anonymous callers. “They accused me of laughing loudly while swimming with my friend and failing to wear a hijab,” Ghul told a human rights organization in the Gaza Strip. “They also wanted to know the identity of the people who were with me at the beach and whether they were relatives of mine.” In a phone interview with the Dubai-based Saudi-owned Al-Arabiya news Web site, the journalist said that the policemen who stopped her belonged to the Hamas government’s Propagation of Virtue and the Prevention of Vice security force.

That’s Islam, pure and simple. The more Islamic the society becomes, the more oppressive it becomes, the less Islamic, the more liberties are made available. The Fakestinian journalist is suprised by it all, which makes it even more surprising as well as amusing. KGS