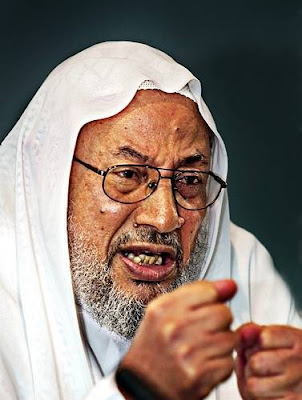 It’s those Jews and Crusaders
that are behind the smearing of the Muslims!

Spencer: “This is no surprise: again and again we have seen Muslim spokesmen disclaim responsibility for any wrongdoing of any kind.

This isn’t even anything new. Right after the 7/7 bombings, jihadist Omar Bakri said that there was no proof that the bombers were Muslim, and his partner in crime Anjem Chaudary said that Britain was behind the bombings. Conspiracy Paranoia Alert: “Conspiracy fever: As rumours swell that the government staged 7/7, victims’ relatives call for a proper inquiry,” by Sue Reid for the Daily Mail, July 3 (thanks to Jean)”:

Today almost four years on, the images of that dreadful morning are etched into our minds: the woman in the haunting white burns mask being helped to safety; the shell-shocked businessman in a suit with his hair and shirt matted with blood; the crippled No 30 bus with its roof blown off; the mangled wreckage of smouldering Tube trains. The country’s worst-ever terrorist atrocity during London’s morning rush hour on July 7, 2005, shattered for ever the heady euphoria in which the capital was basking the morning after winning the bid for the 2012 Olympics.

That afternoon, Tony Blair – who was hosting the G8 summit on global poverty in Gleneagles, Scotland – returned to Downing Street to pronounce that the attack was an act in the ‘name of Islam’.

And so the story of 7/7 that we have come to accept was pieced together: four British Muslims – Mohammad Sidique Khan, 30, Shehzad Tanweer, 22, Jermaine Lindsay, 19, and Hasib Hussain, 18 – blew themselves up using home-made explosives, killing 56 and injuring 700 on three Tube trains and a double-decker bus.

They had travelled on a mainline train from Luton into King’s Cross Thameslink Station in London, each carrying a heavy rucksack of explosives.

It is a version of events that has been endorsed by a high-level Parliamentary inquiry and a government report, both published in May 2006 ten months after the event, based on 12,500 statements, a police examination of 142 computers and 6,000 hours of CCTV footage.

The report insisted that the bombers acted on their own, constructing explosives from chapatti flour and hair bleach mixed in the bath at a flat in Leeds, Yorkshire, where all four had family and friends.

It concluded that the Muslim bombers were not controlled by a terrorist mastermind, but inspired by Al Qaeda ideology picked up on extremist websites.