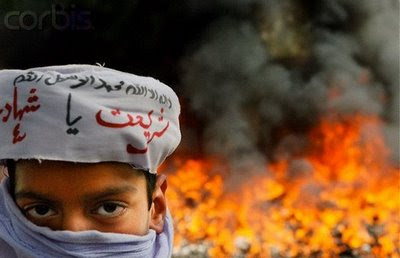 Followers of the mad prophet: We do as we likeWhy people believe the “Islam is the religion of peace” meme is beyond me, the only places in the Islamic world they can point to that have an outside appearance of being tolerant, are those Islamic states and communities yet to be fully Islamized. Meanwhile, Pakistan burns Christian homes and churches and the international community is silent. KGSVia Jihad Watch:Pakistan: Muslims, incited by mosque broadcasts,
burn down 100 Christian homes and churches

And the world yawns. I have many times reversed the situation in headlines to stories like these — i.e., “Christian mob burns down 100 Muslim homes.” Can you imagine the international outcry, the “Islamophobia” studies launched, the hand-wringing at the UN, if a Christian mob (chanting “Deus vult” or “Christ is risen” or some such) began setting fire to Muslim homes and mosques? Yet when Muslim mobs go wild and attack Christians, as they do so often in Pakistan, Egypt, and Nigeria, the international media goes dark, Ban Ki-Moon sees nothing worth remarking upon, Barack Obama sends more money to the government of the perpetrators, and life goes on as usual.

ICC partners received the news this morning and went immediately to the scene to help injured Christians transferred to Lahore, renting two mini vans for this purpose. So far 9 burned women and 4 children have been transferred to Lahore for further medical treatment. All of them have been injured by throwing acid on them. Local police have arrived on the scene but the situation is out of control as thousands of Muslims have gathered for this purpose.

More details to follow. Please call the Pakistani embassy in your country to ask them to protect the Christians in Kasur South.