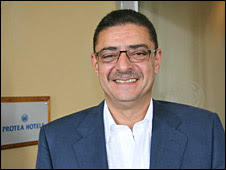 Mahmoud Taher, Egypt head of delegation:
“These are good boys, religious boys and very well disciplined,
they would never do such a thing”Yeah riiiiight. After beating top ranked Italy 1-0, some of the fabulous Pharaohs chose to celebrate their victory in their hotel rooms with a bunch of local hookers, and got ripped off R20,000 ($2,400) in the process. Perhaps running to the police and blaming the hotel staff for the theft of the money wasn’t such a smart idea, because no one is buying it, especially not the police.What happened afterwards, an Egyptian sports announcer calling them “dirty” football players, a chief striker threatening to quit the team, and the head of the Egyptian delegation, Mahmoud Taher spinning one yarn after another in an attempt at some form of damage control, only added to the spectacle. Egypt’s greatest and worst moment in international soccer came one right after the other. First, the Pharoahs beat the world champion Italian team, and then they celebrate the win with hookers… who rip them off.I believe Mahmoud Taher’s lame explanation of the theft, as well as his defense of his players, saying that “they are all deeply religious and well disciplined boys, very religous” (stated on Finnish MTV4 news broadcast) so they couldn’t have been with hookers, was the icing on the cake. KGS

The South African media is claiming that an alleged robbery from the hotel rooms of some Egypt players on Thursday evening was nothing to do with burglars but with prostitutes.

On Friday, the Pharaohs’ team manager Inas Mazhar reported that $2,400 US had been stolen from the rooms of some players on the night the African champions defeated Italy 1-0 in the 2009 Confederations Cup.

City Press said on Sunday morning that police sources confirmed that there were no signs of forced entry and added that CCTV footage showed scantily-clad women moving around a number of hotel rooms during what seemed to be a party.

“The players must explain why their rooms were not broken into and why their room safes were not tempered with but they still lost money,“ an unnamed police source told City press.

Sunday World, another Johannesburg publication, quoted a police officer as saying, “we have confirmed that some of the players brought prostitutes whom they picked up on Oxford Road to their hotel rooms and we have strong suspicions that they were cleaned by ladies of the night.”

Security guards who guard the hotel told the same newspaper that: “when they (the players) were robbed, they pointed their dirty fingers at hotel staff – that’s nonsense.”