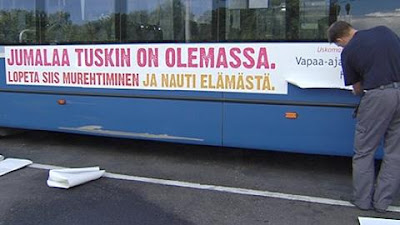 Thanks to Esther at Islam in Europe for the heads up on this story, which happens to take place in the Tundra Tabloids’ own backyard. The TT knows the person, Jussi Niemelä who’s spear heading the current ad campaign that calls into question the existence of a deity.

The campaign has apparently caused enough commotion in the cities of Tampere and Turku, that local bus comapanies have refused the signs, Helsinki however is a different matter. I translated the article dealing with two Muslim bus drivers that come up on both sides of the issue. One is openly against the ad campaign and wants to refuse to drive while it lasts, the other sees a division between work and religion. KGS

The advertisments don’t affect me, nor will they ever says muslim bus driver, Muharrem Kartal, in the Helsinki trainstation square.

After Mid Summer holidays (St.John’s day), an atheist ad campaign began on the sides of buses which has divided the opinions of Muslim bus drivers.

“This kind of thing can’t be approved of”, said an upset bus driver on Saturday in the Helsinki Trainstation square, when he saw the work of the atheists new advertisements.

The man is fiercely of another opinion, and is thinking of a work stoppage, if the text will be put on the sides of his bus. He says that religion in an important part of life – also during work hours behind the wheel of a bus.

We pray in the bus, usually during break time.”

He doesn’t want to divulge his name.

Coming around the corner to the next bus stop is a local bus driver, Muharrem Kartal, himself a Muslim, who wonders about his colleagues reaction.

Religion and work are different matters. The reason I drive a bus is to put food on the table, not for religious reasons.”

The atheist ad campaign got its start in Britain, but in Finland it’s been implemented by the Free-Thinkers and the Humanist League.

Spokesman for the Free-Thinkers Union, Jussi K. Niemelä said he had a hunch, that the campaign would create a resistance. It was alright in his opinion, if transportation managers arranged their shifts that, no driver need drive a bus with a sign that would insult his beliefs.

NOTE: The TT applauds the one driver who knows how to divide work and religion, the problem arises when he tries to find backing from Islamic orthodoxy, which pretty much calls the shots on what’s allowed and what isn’t.