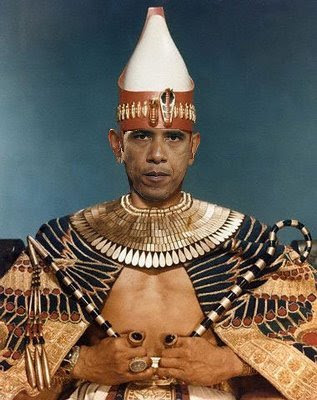 Obamatut: This is the thanks I get
after all I’ve never done for them

You can only fool people for so long, before they begin to realize that something isn’t right. If the Israelis chose to believe in this guy, then its their right to do so, but the Tundra Tabloids does not. Presently, it looks like the majority of Israeli Jews view Obamatut in the same light, and it’s going to take more, much more to aussage their justifiable fears about his true feelings towards the Jewish state. Pandering to the Arabs is not the way to go about it, and to be fair, George Bush Jr. did much of the same as the current US potentate, but then again he didn’t go around talking how he’s going to force a settlement on its US ally, he put the bar rather high for the Arabs to reach….and they failed miserably. Now Obama wants to revert back to pre-Oslo days, which means emphasizing negotiations now, that will supposedly result in a settlement in due course, which will bring an end to hostilities later.They are retrying a policy that has been proven to have been a failure, which means that they haven’t learned a flipping thing. The failure of Oslo was the main reason why the Sharon government decided on building the anti-terror barrier (a proven successful concept) and withdrew from Gaza. The main emphasis would be from now on, upon security first, peace making second. The Arabs have proven themselves incapable of providing Israel any sign that they are serious about ending the violence/war, but Obamatut has shut his eyes to that.That’s why Jewish Israelis are not buying Obamatut’s overtures of support for Israel right now, for his policies speak of his true motives no matter how nice sounding his words are. They (Israel) have already seen it and done it, and they want no more part of it. They are waiting to see how much emphasis Obamatut’s administration is going place on ending incitement of Israelis and Jews within the PA, as well as a ZERO tolerance to violence, meaning no PA funded operations against Israel.Besides, how the Palestinians will begin treating themselves will be an important indicater of how much that society has moved in the direction of normalcy, and whether their democracy will be built on rule of law. All else is just high sounding platitudes and blue smoke and mirrors. In the end, only actual results on the ground will count, which will mean a much tougher stance by the US administration on the Arabs, like demanding results in exchange for helping to end the conflict. Recognizing Israel as a Jewish state, will be one small step in proving their sincerity. KGSH/T: TINSCWashington reiterates support for Israel

The Obama Administration insistently reiterated its support for Israel this weekend after a Jerusalem Post poll found that only 6 percent of Jewish Israelis now consider Barack Obama’s presidency to be pro-Israel.Fifty percent of those sampled consider the policies of Obama’s administration more pro-Palestinian than pro-Israeli, and 36% said the policies were neutral. The remaining 8% did not express an opinion. The numbers were a stark contrast to the last poll published May 17, on the eve of the meeting between Prime Minister Binyamin Netanyahu and Obama at the White House. In that poll, 31% labeled the Obama administration pro-Israel, 14% considered it pro-Palestinian and 40% said it was neutral. The other 15% declined to give an opinion.