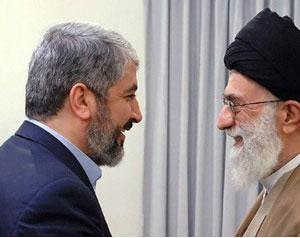 Hamas’ Meshaal: Of course we’ll break
bones for you, when do we start?
If the story pans out, no doubt the Hamas bone crushing goon squad was not flown in to ”help out” the regime, they were already in Tehran honing their trade. These people are pure beasts, whether in fatigues or in suits, and yet Western stooges like Carter are pressing for their being taken off the terror list. Check out what these Iranians are saying about Hamas and the Palestinians in general. Talk about a wake-up call, these are the people they’ve been supporting, and are now getting a taste of what they inflict on a daily basis in Gaza and in the disputed territories.
Protesters to ‘Post’: Hamas helping Iran crush dissent

They made their allegations as rioting on a scale unseen in Iran for nearly a decade continued in the wake of the elections and the allegations that the results were falsified. The protests have now spread from Teheran to other major cities.

The most important thing that I believe people outside of Iran should be aware of,” the young man went on, “is the participation of Palestinian forces in these riots.”

Another protester, who spoke as he carried a kitchen knife in one hand and a stone in the other, also cited the presence of Hamas in Teheran.

On Monday, he said, “my brother had his ribs beaten in by those Palestinian animals. Taking our people’s money is not enough, they are thirsty for our blood too.”

It was ironic, this man said, that the victorious Ahmadinejad “tells us to pray for the young Palestinians, suffering at the hands of Israel.” His hope, he added, was that Israel would “come to its senses” and ruthlessly deal with the Palestinians.

When asked if these militia fighters could have been mistaken for Lebanese Shi’ites, sent by Hizbullah, he rejected the idea. “Ask anyone, they will tell you the same thing. They [Palestinian extremists] are out beating Iranians in the streets… The more we gave this arrogant race, the more they want… [But] we will not let them push us around in our own country.”

Israel will only do what is needed to protect itself from Hamas and other Palestinian terrorists, no more. I find the words of this Iranian telling, those who are confronted with these beasts have a different point of view of their “plight”, than those who suck up to them and get to have photo ops taken with them and treated to the standard “horse and pony” shows of alleged Israeli misdeeds.
The sign of Hamas in the streets of Tehran should be a wake up call for all the fence sitters on the Arab-Israeli conflict issue, this can no longer be reasonably defined as just a conflict between two nationalist movements. The Hamas deems it’s fighting for the good of the whole Islamic world, and Iran is its benefactor. KGS