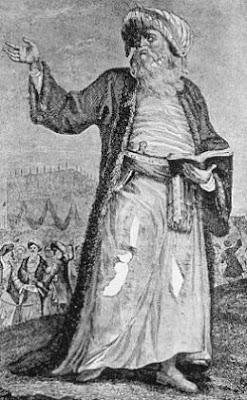 Mad Prophet Mohamed: They became Islamophobic
when they refused my message, so I just had to kill them
The Saudi Gazette tries to debunk the “Islamophobes”. Lets face the facts shall we, whenever it’s a non-Muslim daring to raise his/her voice about the obvious inherent defects within the political/religious ideology called Islam, charges of “Islamophobia” are soon to be heard.The Tundra Tabloids believes that the hundreds of millions of ‘infidels’ murdered and enslaved by that desert ideology over the centuries, should earn the right for the non-Muslim to counter the bogus charge of ‘Islamophobia’, with the just and rightful claim that Islam, in all of its trappings, is Infidelophobic by nature, and can only cease being so, when it rips out huge tracts from its ‘holy books’. KGSNOTE: It would be great to witness an online debate between Faraz Omar and Robert Spencer concerning the claims Omar makes against Spencer. I doubt Omar would be up to the challenge though, and he more than likely knows that to be the case.Debunking claims of Islamophobes

Islamophobia is not new. Islamophobes have not suddenly appeared. The Prophet (peace be upon him) was himself a victim of Islamophobia. Indeed, pagan Arabs would wait in the outskirts of Makkah to warn every traveler and visitor about Muhammad (peace be upon him). They called him a sorcerer and a magician who should not be listened to. So much so that Tufail Bin ‘Amr Ad-Dausi, the chief of Ad-Daus tribe, stuffed cotton in his ears to avoid listening to the Prophet (peace be upon him). He came to the Ka’ba for Tawaf while the Prophet (peace be upon him) was absorbed in prayer. The man felt compelled to hear what the Prophet was reciting. He pulled out one ear’s cotton and then the next one came out. Listening to the beautiful verses of the Qur’an and its message, he embraced Islam.The examples are too many to list, but the point is: though it may never be possible to change media’s attitude towards Islam and Muslims, what is possible is that every Muslim male and female turns into a walking-talking mobile advertisement for Islam! Imagine the impact on the world if majority of Muslims practiced the teachings of Islam – worshipped God alone, obeyed the Prophet, were truthful in their words and deeds, and were merciful to the creation.

Great, if all Muslims obeyed their backward prophet in words and in deeds, Al-Qaida and ilk would indeed then be the norm, not a supposed anomaly. KGS