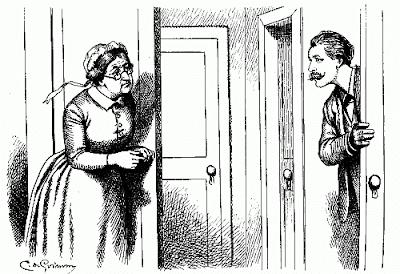 Psssssst, I hope you survive the night mam.

Obviously not all Muslims treat their womenfolk in the same like manner, but it’s more likely due to the fact that these modernist Muslims have been influenced by other non-Islamic cultures than by Islamic ones. The more cut off from the Islamic world Muslim communities become, the less rigid they are to normal societal interaction between peoples and religions.

What’s happening in the Islamic world today, is the reconnection of these various different Islamic communities to the greater Ummah, which in turn means a steady path to their radicalization. They’re being slowly indoctrinated by the purist message being disseminated by the Saudis, the Egyptians and other voices of orthodoxy in the Islamic world. KGS

When the landlady of my Toronto apartment building said an outraged neighbour had filed a complaint about me over an apparently inappropriate hallway interaction with his wife, my mind raced through the countless conversations I’ve had with fellow tenants, none of which seemed a possible source of offence.

It turns out, it wasn’t a salacious transaction that had caused the complaint, but rather a neighbourly and — to me — entirely forgettable greeting, little more than a brief “good morning” as I passed my neighbours on the way to work.

Still, it was enough of an affront for the man — once a doctor somewhere in the Middle East, my landlady clarified — to feel I had broken a cultural taboo. The incident started an awkward feud which has involved warnings not to repeat my indiscretion and one face-to-face shouting match, which included allusions to my impending death.

I expect the battle will wage on, as we appear to be stuck at an impasse.