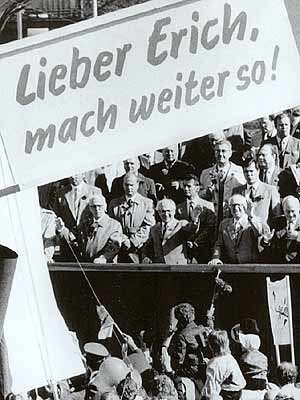 Outside of mass murder and race policies, there is little to distinguish between Erich Honecker’s fiefdom of German communism and Adolf Hitler’s Fascist National Socialist state. But since socialism has yet to experience a decisive stake driven into its miserable heart, there are those Germans who still insist on reminiscing or even worse, mourning, the passing of the E.German state.
There won’t be any open mourning for its predecessor, the National Socialist state, thankfully only the fringe of the far-Left fringe are willing to do that, but much of what eventually became the DDR, truly resembled the failed ideology of the defeated Nazi regime. I blogged recently on the subject here, as well as Henrik Clausen at the Gov.
Why anyone still desires to follow socialist thinking, let alone reminisce over it, after all the misery it created, and still does create, is way beyond me. KGS
Was Communist East Germany unjust or just corrupt?

A debate about whether Communist East Germany was an “Unrechtsstaat” (”unjust state”) or merely not a “Rechtsstaat” (”state based on the rule of law”) has been dividing the German political class for months — and it now has spilled onto the front pages this week as the reunited country celebrates its 60th anniversary.
What might seem like a nuance of history has turned into a full-fledged battle that is splitting many eastern and western Germans once again along the fault lines of the long since dismantled Wall that separated them during the Cold War.
Many easterners are annoyed that some of their western brethren are labelling the Communist East German state an “Unrechtsstaat” – a term they see as denigrating not only the state, but also its people, as somehow morally inferior.
Few in the east, a region that is also far poorer than most of the prosperous west, would disagree that East Germany was not a “Rechtstaat”. The German Democratic Republic (GDR), as East Germany was officially known, had no independent judiciary, no free elections and a surveillance system run by the Stasi that used brutal methods to quash dissent for four decades.
But many easterners are rallying behind Gesine Schwan, a westerner who is running for president. Schwan has fuelled the debate by saying she would not label East Germany an “unjust state”, saying that was too “diffuse” a term.
“It implies that everything that happened in this state was unjust,” said Schwan, who is trying to defeat President Horst Koehler in a vote in the Reichstag by a special 1,224-seat Federal Assembly on Saturday. “I would not go this far in the case of the GDR.”