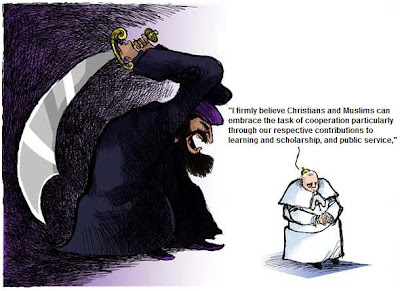 AMMAN (Al-Reuters) – Pope Benedict visited a mosque on Saturday in another attempt to mend fences with Islam after a 2006 speech caused offence, and urged Christians and Muslims to jointly defend religion from political manipulation.

Speaking at the modern King Hussein bin Talal Mosque in Amman, he struck a note of harmony and shared purpose between the world’s two largest religions, continuing a main theme of his trip to the Middle East.

“I firmly believe Christians and Muslims can embrace (the task of cooperation) particularly through our respective contributions to learning and scholarship, and public service,” he told Islamic leaders and diplomats at the mosque.Addressing the pope, Prince Ghazi bin Muhammad bin Talal, reminded the pope of the “hurt” Muslims around the world felt in 2006 after Benedict quoted a Byzantine emperor who said Islam was irrational and violent.

UPDATE: Blogger Carlos feels that the TT might have misunderstood the words of the Pope by relying too heavily on what the MSM reported about the Pope’s encounter and speech. According to Carlos in the comment section of this post: “He (the Pope) actually told them to “embrace reason” and to not use religion as a justification for extremism. You must also view it within the context of the Hashemite Kingdom of Jordan’s internal policies, which compared to Saudi Arabia and Iran are quite moderate and pro-Western”.I’ll admit to having been fully reyling on the Al-Reuters version of the story, which was my mistake, I should have done some more looking around before posting it. Also, the TT does indeed understands how more mordern looking the Jordanians are in comparison to the Saudis, and that the Pontiff’s words should be viewed from that perspective. Thanks for pointing that out Carlos. Check out his own post on the incident here. KGS