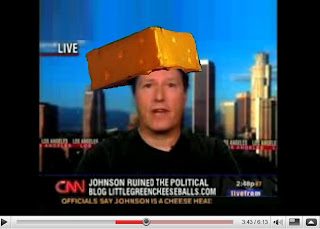 Robert Spencer posted a veiled threat today to attack me physically.”
Charles Johnson, LGF April 26, 2009 Anyone who has made a fool out of the mainstream media as often as the Charles Johnson has can’t be all bad – even if he is making a bigger fool out of himself these days. Five years ago, the talented creator of the Little Green Footballs blog and “co-founder” of Pajamas Media (a top-notch web magazine) went toe-to-toe with CBS News and not only took down Dan Rather, but also won a great deal of respect for on-line journalism in the process…

Then things got weird. Really weird.

What happened to the nearly 60-year-old Johnson after hitting his high-water mark is anyone’s guess. Did success go to his head, or was he really that… um… well-grounded to begin with?

LGF has always had the look and feel of someone trying just a little too hard to be the coolest smart guy in the room. The music video posts and alleged mountain-bike exploits blend with the exaggerated moralizing and mind-numbing philosophical excerpts about as naturally as a ponytail perched on top of a middle-aged face and gut. (Something tells us that chilling with Charles might be about as fun as, say, tying one on with Ross Perot).

Still, no one could have anticipated Johnson getting so worked up over a petty grievance that he would betray courageous allies who already have a hard enough time battling Islamic violence and tyranny in an age of politically correctness.

Johnson’s strange tale of paranoia and rage is probably best told by others. What we will say is that his once-promising blog is, today, little more than a narcissistic venue for pursuing personal vendettas and promoting rigid viewpoints on a narrow range of issues. At one time, LGF was an advocate of free speech and a reliable opponent of Islamic totalitarianism. Now Johnson literally bans opposing viewpoints and spends much of his time smearing anti-Jihadis and “creationists” with the same shady tactics once used against him.

While we sympathize with blog administrators who find it necessary to police against extremists and imposters, the LGF editor is so notorious for purging dissenting comments and permanently expelling readers who don’t toe the ideological line that being banned actually has a name – “getting CJ’d.”. Like a child throwing a public tantrum, Johnson has even taken the extraordinary step of blocking certain sites from linking directly to his own posts.

As a result of this “Green Purge,” the former flagship of the New Media, has all but officially devolved into a redundant monologue that exists mainly as a shifting monument to the editor’s perceived ethical superiority. Johnson’s posts are often bolstered by a dwindling army of loyal hanger-ons, who massage his ego with the sort of obsequious follow-up that brings to mind a “you da’ man” crowd trailing Tiger Woods. Not surprisingly, the blog has suffered declining readership over the last couple of years.

Filtering out contrary opinion also seems to have deepened Johnson’s sense of moral certitude to the point that he is attacking former friends, such as Robert Spencer (Jihad Watch), Pam Geller (Atlas Shrugs) and many others, with unnecessary hair-splitting and flimsy “guilt-by-association” slurs that are unconstructive and highly divisive. (Hence his Dhimwit nomination).

In fact, Charles Johnson is now CAIR’s point man for attacking its own critics – apparently dethroning the “Reverend” Jim Sutter, a utter crackpot whose specious attack on Robert Spencer is still being promoted by desperate Islamic Supremacists. (Ironically, Sutter’s only other claim to fame is Internet censorship – with one of his targets in 2007 being LGF itself).

Johnson’s slander of Robert Spencer (and others) is only a bit more sophisticated than CAIR’s, although no less shallow. In order to establish that the founder of Jihad Watch is a bigot (or Nazi) who hates Muslims and Jews, it is first necessary to ignore what Spencer actually says about Muslims, Jews, Nazis and bigotry. Once this restriction is in place, an intricate “Six Degrees” linkage is concocted between the hapless Spencer and real-life neo-Nazis through some sort of Rube Goldberg-like sequence of personal associations. Somehow this is supposed to fool people into believing that Robert Spencer, a staunch public defender of Israel and chronicler of hate crimes against Jews, for example, is actually a closet anti-Semite.

Of course, Spencer’s support for Israel is one reason why he periodically brings down CAIR’s wrath – and the irony doesn’t end there. The connection between Spencer and true Nazis is downright imaginary compared to the fact that CAIR and the Islamist terror group Hamas actually share the same parent organization. More importantly, although Spencer openly condemns neo-Nazis, CAIR adamantly refuses to condemn Hamas as a terrorist group even though its members routinely murder Jews!

So our message to Charles Johnson is… Good god, man – what are you doing? Being used by the likes of CAIR? Sinking to the clownish level of a Garofalo or Olbermann? Implying that Jewish Pam Geller is a neo-Nazi sympathizer and affable Robert Spencer is about to pull out a nine and throw down on you?

Come on now, Charles. You don’t belong on this list. The bitterness is making you look small. Time to ditch this childish paranoia and move back into the real world… where the love is. Come on back to your homies.

All will be forgiven… and we promise not to let anyone call you a fascist!

BUT THAT’S NOT ALL! CJ believes he has a valid case for calling Geert Wilders a fascist, and reaches to Rusty Shackleford from My Pet Jawa for support of his claims. MPJ obliges, somewhat, and CJ gets a warm feeling up his leg.CJ: “Kudos to Rusty Shackleford. He correctly points out that it’s “inconsistent” for Wilders to claim to be standing up for freedom of expression at the same time as he calls for banning books and taking away basic rights from people; but I’ll go further. It’s deeply hypocritical, and deeply un-American to call for these things. These are fascist opinions. And American citizens who applaud this kind of rabble-rousing populist garbage should be ashamed of themselves.”

But of course, serial libelist blogger, Charles Johnson, is badly misrepresenting what Wilders is calling for. Geert Wilders is not calling for the “banning of books”, but only insisting that the Dutch government be consistent in the way it treats books that promotes incitement and hatred. The Dutch government has banned Mein Kampf, and like the great Winton Churchill, Wilders deems the Koran to be a fascistic book that promotes the hatred of others, and therefore should be banned under Dutch law.Johnson knows this, having been reminded an umpteenth number of times, but chooses anyway to misrepresent what the Dutch law maker has said. The same can be said about “taking away the basic rights from people”, something that Geert Wilders has never called for. Wilders is talking about people that have broken the law, either through directly aiding and abetting terrorism or through trying to subvert our societies with the advancment of anti-democratic sharia laws. But anyways, look at what Robert Spencer says about the whole issue, laying things out in the open for all to see, he’s a very honest guy. Sadly, the same cannot be said of the serial libelist blogger Charles Johnson, who makes every attempt to obfuscate the real issues in order to safe some face, and loses each time. KGS