First of all, the Tundra Tabloids admits to not having read Carlo Panella’s book, so there is little to go on for this English and Finnish reader, other than this online English translation of a review in Italian, and this review by the Keskisuomalainen journalist, Juhana Lepoluoto, which happens to be the center piece of this blog post. What the TT can ascertain from the two reviews of the book, is that its main thesis is about the dogmatic institution of Jihad that spans Islamic history, which has influenced not only the traditionalist/fundamentalist Muslims, but also the self proclaimed secularists of the modern age as well. Panella suggests that Islam is central to the rise of jihadist terrorism in the present age, not ‘blow back’ from the perceived “negative influences of Western imperialism”.Enter one of the more superficial journalists
in the Finnish media, Juhana Lepoluoto 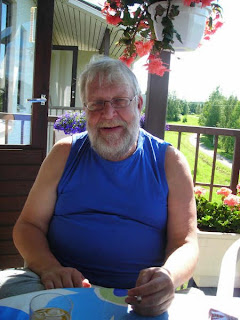 Juhana Lepoluoto: It’s great to be me,
I get to pontificate without fear of being taken to task
Juhana Lepoluoto happens to be one of the more badly informed, and heavily biased journalists working for central Finland’s largest news daily, the Keskisuomalainen. The man typically writes from a Leftist perspective, whose reporting is made indiscernible from his own privately held views.In writing a review however, anyone, including journalists, are allowed to interject their own perceptions of the facts contained in the book being reviewed, but one should nonetheless avoid appearing superficial in handling those facts, whether they be in agreement or disagreement with the author’s assertions.Alas, Lepoluoto can’t help but to be superficial, whether it’s in his news reporting, ‘analysis’ columns or in book reviews. The only good thing that can be said of his journalistic habits, is that he’s consistent if anything else. So it’s only logical that in his review of the Carlo Panella book, we find the same phenomenon reoccurring, which I call, “acute-superficialitis“. Lets take a look.

Lepoluoto: Panella’s Islam-book is a volumed indictment that cascades an avalanche of countless facts to the reader, which tries to convince that Islamic governments, not the whole of Islam, are to blame for the nearly century-long bloody terrorist wars against the Jews and other peoples. For Panella, the great Mufti of Jerusalem, (TT: Hajj Amin Al-Husseini) and Nazi ally, is the same holy war terror tactician as the hope of the Soviet Union military, Yasser Arafat and Saddam Hussein. As a result from the detailed evidence, these secular Sunni socialists are the same practitioners and fomentors of jihad, as the founder of the Iranian islamic government, the Shiia Ayatollah Khomeini.

Here he shows signs of complete ignorance and a crass interpretation of the historical record. Thinking as a Westerner and as a Socialist, Lepoluoto fails to understand the depth Islam plays in the psyche and subconscious of the Arab Muslim. Unlike the westerner who is able to divide state and religion, the Muslim, especially the Arab Muslim, no matter how how secular, will nonetheless come to the defence of Islam if the situation warrants, whether for self gain or through sincere conviction.Believing that a Socialist Arab Muslim leader would deem his political ideology of more importance and supreme to that of Islam, is not born out by the facts, not even close. In the case of Saddam Hussein and Yasser Arafat, while they most certainly clung to a secular lifestyle, Islam and Jew hate was never far away from their thoughts, in spite of their socialist-secularism…which is pretty much an oxymoron in its own right.

Arab Socialists, Wahhabi preachers, Muslim Brotherhood members, the Iranian Revolutionary Guard, suicide attack instigators, they are to Panella, all the same group that want to drive the Jewish people into the sea, just differently masked jihadists.

He obviously believes that there is no Islamic link between all these groups, no “green thread” that winds in and out of their thinking, that they just happen to hate Jews, supposedly has nothing to do with the words of their prophet.

There is no room to mention in his work about moderate Saudi Arabia and the current King Abdullah, who has made a broad attack on the extreme wahhabi cells, crushing them and modernizing a society that’s stuck in the past.

Saudi Arabia is the epic center of the Organization of the Islamic Conference, which is spearheading the drive to Islamize the West, and whose chairman holds to the fiction that there’s no such thing as a Muslim anti-semite. Saudi Arabia, thanks to the ruling family, is also the principle funder of fundamentalist Islamic preachers and the chief disseminater of the worst anti-Jewish literature in the West. The fact that this clown belittles the dangers Islam poses for his own amusement, shows just how much we are up against. Not only do we have to contend with the jihadists themselves, but with their useful stooges as well. KGS