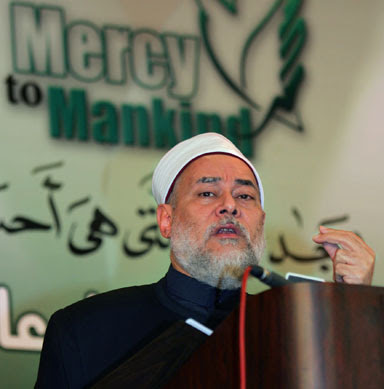 Egyptian Grand Mufti: Ali Gomaa: Islamic sanctioned fornication shows Islam’s capability to adapt to social changes. This ruling also shows why I am the most widely respected jurist in the Sunni Muslim world! Funny thing about these ‘valid Islamic solutions’ like nikah mesyar (legalised fornication) that’s to “protect Muslims from committing sins,” they’re never offered to women, just the men. Ali Gomaa is another fine example of the seasoned scholarship at Egypt’s Azhar university. with enlightened men like Gomaa and Tantawi leading the Islamic world…all is well. KGSWith thanks to Sheikh Yer’Mami

“Background: Sheikh Ali Goma’a (Arabic:علي جمعة ‘Alī Jum‘ah) is the Grand Mufti of Egypt through Dar al-Ifta al-Misriyyah succeeding Ahmad El-Tayeb. He has been called “one of the most widely respected jurists in the Sunni Muslim world,” and described as “a highly promoted champion of moderate Islam,” gender equality, and an “object of hatred among Islamists.” He specializes in the science of the foundations of Islamic Law, viz. Usul al-fiqh. He follows the Shafi`i school of Islamic jurisprudence.In case you don’t remember: the Grand Mufti Ali Gomaa is the guy who would blow up the pyramids because they stem from the pre-Islamic era, the Jahiliya, the pre-Islamic Arabian age of “ignorance”. This is the Grand Mufti from Azhar university who claimed that even the urine and the excrement of the prophet were pure gold. Ali Gomaa decreed the killing of Israelis travelling to other countries permissible in Islam, because Israelis are “Harbi and the Harbi spreads corruption throughout the face of the earth.” His WIKI profile is heavily doctored, if not laughable: Gomaa believes the best antidote to Islamic extremism is “traditional conception of sharia law — along with knowledge of Islamic jurisprudence”” Much more here.

Nikah mesyar is a Sunni Muslim marriage contract in which the woman gives up many of the rights she would be afforded under a traditional marriage contract. (Folks, somehow this sounds like some arms length transaction in the vice trade).

Although the marriage is official, the couple does not live in the same house and the husband is not required to provide for the wife or for any children they may have.

Such marriages are considered an alternative for people who wish to get married but cannot afford a traditional marriage. It is called the “travelers marriage” since it often takes place when men are away from their wives and wish to have relations with another woman.