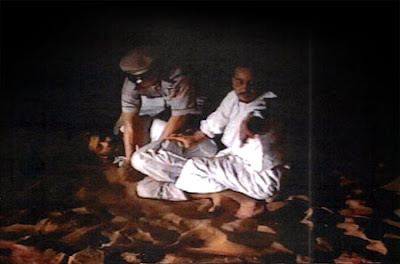 Sheikh Issa bin Zayed al Nahyan:
Torture? No, it’s our way of life!
In July of 08′, the Tundra Tabloids ran the story of Texas businessman Bassam Nabulsi, who came into the possession of tapes showing Sheikh Issa Bin Zayed Al Nahyan, brother to the crown prince of the U.A.E, torturing an Afghan business partner, Mohammed Shah Poor. At the time of the TT’s blog post, Bassam Nabulsi had a lawsuit against the Sheikh for wrongful imprisonment and for initiating torture against him through prison guards, in an attempt to retrieve the video tapes that showed the sheikh torturing his former business partner.Bassam Nabulsi was incarcerated in the U.A.E. prison for three months on a trumped up drug charge concocted at the behest of Sheikh Issa Bin Zayed Al Nahyan, and during which time the US citizen’s family was threatened by the sheikh, who said he would kill them if he failed to hand over the tapes. He was eventually acuited of the drug charges and made his way back to the US. Read Nabulsi’s accounting of the whole story here.Now the tapes have been reveiled in an ABC News’ “Nightline” segment, that shows the brutality of the man torturing Pool by “shooting an M-16 into the ground in front of where Poor was kneeling, stuffing sand into his mouth, sticking nails repeatedly into his buttocks, whipping him with a board containing nails, repeatedly kicking his head, whipping his buttocks until they bled, pouring salt onto his wounds, pouring lighter fluid onto his scrotum and lighting it on fire, sticking a cattle prod up his anus, and running over him with Sheikh Issa’s Mercedes SUV.”Debbie Schlussel takes note that:

Incredibly, ABC News anchor Terry Moran–brother of liberal pseudo-conservative hack blogger and Islamo-apologist Rick Moran–has the utter gall to compare this real torture to America’s “torturing” (which is nothing close to this) of no more than three Islamic terrorists–including Khalid Sheikh Mohammed and Abu Zubaydah–who were bent on our destruction.

“Brian, that is a shocking investigation, especially as our own country is engaged in a wrenching debate on torture.”

You Schmuck. We never did anything like this to terrorists. This is inhumane. And this man is a grain farmer, not a terrorist. That this Terry Moron has the nerve to compare our legitimate use of mild discomfort to find out terrorist plots against Americans, to the near-murder of a grain farmer is just plain sickening. This farmer miraculously survived, but he spent months in the hospital with massive internal injuries. We never did that–or anything close to that–to the terrorists we interrogated, who actually deserved it far more.

U.A.E. Torture is a website devoted to the incident, and deserves a thorough read for anyone interested, and disgusted at Western personalities, whether they be Hollywood actors, professional sports celebrities or politicians, enjoying the sun and surf of a country that is ruled by cut throats like that. Believe me, this thing runs deep, and is one of the reasons why no Arab state ever voiced disapproval over Saddam Hussein’s murderous regime, because they all do it. KGSH/T Baron Bodissey Viewer discression is advised