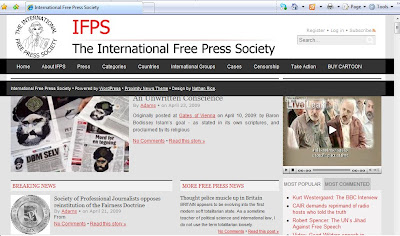 Oh try that they may, the Pakistanis and ilk, are no match for the voices for freedom and superior Western values and culture. People from all over the globe who have made their home in the West, and have gladly accepted what the West has to offer, many of whom are Muslims themselves, will agree.

“The sale of signed and numbered prints of Kurt Westergaard’s “Turban Bomb” cartoon — which coincidentally was widely publicized just before the attack began — continued unabated during the site’s downtime. A limited stock of them is still available, but they are being snapped up rapidly.The editors have some catching up to do, but they have resumed tracking the free-speech news stories, and new material is now being posted there. Go on over to IFPS and see how content-rich the site has become.”

Exactly! Help defend our free speech rights and expose the Islamization of the West by supporting the IFPS. Do it today. KGS