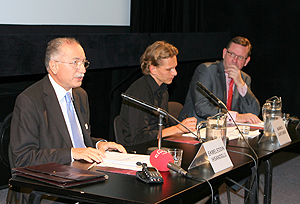 This April 20-24, UN World Conference against Racism, Racial Discrimination, Xenophobia, and Related Intolerance (DURBAN II) will convene in Geneva Switzerland at the behest of the UN’s Human Rights Council (UNHRC). The conference is mandated by the UN General Assembly for the organizing and convening of the event “towards the effective and comprehensive implementation” of the conclusions and recommendations of the first conference held in Duban S.Africa in 2001.
The conference’s aim is to implement a “global drive for the total elimination of racism,” and such a noble goal demands closer scrutiny, especially since many of the countries organizing the conference, are themselves, chief violators of human rights and promoters of anti-Semitism. One of the main organizers of the conference is the Organization of Islamic Conference (OIC),

Last October in Helsinki, 7.10.08, the visiting head of the OIC, Secretary-General, professor Ekmeleddin Ihsanoglu, was invited to speak at a seminar sponsored by the Finnish Institute for Foreign Affairs (UPI). During the question and answer period following his speech, The OIC’s Sec-Gen gave a startling statement to a question I had asked concerning the well known phenomenon of Muslim anti-Semitism.

The professor boldly stated that “No Muslim good or bad could be anti-Semitic, this is a theory, this is not the case.” With that statement, Ihsanoglu denied the existence of anti-Semitism anywhere in the Islamic world by any of the 1.3 billion Muslims living there. Ihsanoglu’s bigoted statements were recorded live on film and available on You Tube, making this incident a fact, and part of the public record, not hearsay.

The question the Finnish government needs to ask itself, is “how can it maintain its record on human rights and being against anti-Semitism, after attending a conference orchestrated by the OIC whose Secretary-General has bigoted opinions about non-Muslims, while being in denial about anti-Semitism in the Islamic world?”

The Finnish Foreign Ministry needs to debate the wisdom of associating with and organization that denies anti-Semitism, while at the same time spearheading a conference dealing with racism. Hiding behind EU foreign policy, or behind the actions of the other larger EU member states does not absolve Finland from doing the right thing. That’s if Finland is still serious about its credibility as promoter of human rights and active against anti-Semitism in the world today.
For more about Scandinavia, its anti-Semtism and it’s humantarian racism, read Manfred Gerstenfeld’s seminal, authoritative work, Behind the Humanitarian Mask. KGS
NOTE: None of the Finnish participants in the UPI’s seminar have publically challenged the OIC Secretary-General’s (Ekmeleddin Ishanoglu) statements of denial about Muslim anti-Semitism. Apparently, UPI Director, Raimo Väyrynen and Helsinki University academic Marko Juntunen think that if they close their eyes to it, it’ll go away. Fat chance.