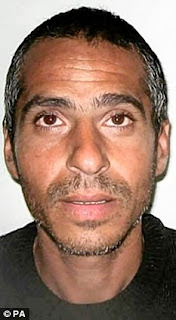 Ali Majlat: To rape and get caught is my goal

Louise took three days to tell her boyfriend what had happened. She desperately wanted his support, but thought he’d be disgusted by her. ‘I worried he’d never be able to look at me the same way again,’ she says quietly. ‘I thought he’d think it was my fault.’

Shame stopped Louise telling her parents, too. So on the evening she was violently raped, robbed and half-strangled, this 21-year-old went home alone, cried, bathed and tried to shake off the lingering horror of the brutal attack. It was the disgust she felt towards herself that convinced her how other people would react.

Thankfully, she couldn’t have been more wrong. When they found out, her family and friends reacted with sympathy and support. Everyone was appalled by the hideous assault. Everyone, that is, except for the perpetrator, Ali Majlat. He was absolutely delighted. Now he would get exactly what he wanted: a lengthy custodial sentence in a British prison.

For, in a twist that cannot fail to spark shock and outrage, Majlat, 35, had travelled all the way from his native Romania with that one goal in mind. The inspiration for this staggering act of calculated brutality? His older brother, Dominic, who had written to him from HMP Wakefield, West Yorkshire, saying how much he was enjoying his stay.

Dominic had boasted of having not only his own TV, but a wealth of computer games, food, bed and free English lessons – a sad indictment of how our jails are viewed as cushy throughout the world.

For Ali, poverty-stricken and illiterate, such a place sounded glorious. He hatched a plan to commit a jail-worthy offence and hopped on a bus to Britain. His choice of crime was easy – after all, it was a charge of rape and attempted murder that had bestowed on his brother a lifetime of free lodgings and luxury extras.

And the obvious location was Wakefield, from where Majlat assumed he would be taken to live with Dominic. It would be like the orphanage they grew up in together, only with perks.