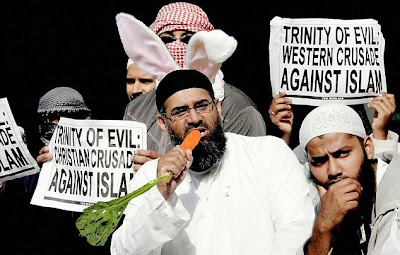 Anjem Choudary: “When we criticize it’s ok,
it’s because we’re Muslims, we can do anything we want”

EASTER is evil, proclaimed Muslim preacher of hate Anjem Choudary last night as he plumbed new depths by delivering his vile attack on the holiest Christian festival of the year. The message was posted on Choudary’s website Islam4UK, which is a group inspired by exiled cleric Omar Bakri that wants the “flag of Allah” to fly over Downing Street. An article on the site claimed that Easter was merely a “pagan festival” and “nothing to do with Jesus”.
Firebrand cleric Choudary, who led the insults against a parade of British soldiers in Luton last month, denied writing the article, but when asked if he believed Easter was evil, he said yesterday: “I think that anything that’s non-Islamic is evil, I do believe that, yes. To attribute a son to God is anathema to Islam and I do believe that it’s an insult to God.”
When it was suggested that Christians might be offended, he said: “It’s not insulting to disagree with people’s beliefs. I’m not saying that Christians are evil.” He said Christians should “accept the final message of Mohammed and come back to the true monotheistic faith”.

Actually, the Tundra Tabloids agrees with Anjem “Bugs Bunny” Choudary, one can criticize religion, any religion, and any other ideology as well. So, in the words of Helsinki city councilman, Jussi Halla-aho:
Prophet Muhammad was a pedophile and Islam reveres pedophilia as a religion. Islam is a religion of pedophilia. Pedophilia is Allah’s will.