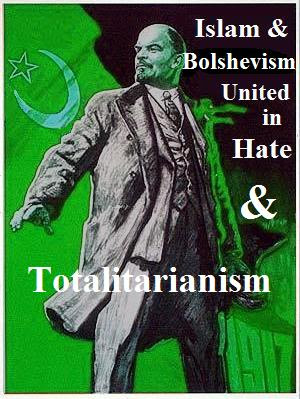 The Tundra Tabloids’ good friend, Andy Bostom, explores the comparisons between Bolshevism and Islam, and the “contemporary phenomenon of Leftist support for jihadists and jihadism.” There is no whitewashing the nexus that exists between the two ideologies, as the communist concept of a secular religious and universal state, mirrors that of the Islamic model and its sharia legal system. The authors Bostom quotes, have all seen the parallels that exist between the two societal systems, and that is why the Left is loathe to out its cousin. KGS
The Genocidal Harvest of Leftist Self-Loathing

In a recent blog, I described how a courageous modern “traditional liberal” politician, Geert Wilders, aptly warns of the dangers posed by the ancient, but living totalitarianism of Islam, an entirely unreformed, and unrepentant religio-political system.

Why does the Left—from the more vociferous, to the (outwardly) sober—openly embrace, or rationalize, or at very best ignore and fail to condemn—the totalitarian scourge of contemporary jihadism, and all its accompanying “sacralized” Islamic ugliness: genocidal hatred of non-Muslims, Muslim “apostate” freethinkers, and women?

Almost immediately after Bolshevism emerged as an important political ideology, with real power, Bertrand Russell understood its similarity to Islam. He made the following comparison between Islam and Bolshevism in his 1920, “Theory and Practice of Bolshevism”:

Bolshevism combines the characteristics of the French Revolution with those of the rise of Islam.

Marx has taught that Communism is fatally predestined to come about; this produces a state of mind not unlike the early successors of Muhammad.

Three decades later, sociologist Jules Monnerot’s “Sociology and Psychology of Communism” (first published in French in 1949) opened with a chapter describing Communism as, “The Twentieth-century Islam.” Monnerot noted that like its religious antecedent, Islam, “Communism takes the field both as a secular religion and as a universal State.[emphasis in the original]” He concludes the comparison by observing,

This merging of religion and politics was a major characteristic of the Islamic world in its victorious period. It allowed the head of a State to operate beyond his own frontiers in the capacity of commander of the faithful (Amir-al-muminin); and in this way a Caliph was able to count upon docile instruments, or captive souls, wherever there were men who recognized his authority. The territorial frontiers which seemed to remove some of his subjects from his jurisdiction were nothing more than material obstacles; armed force might compel him to feign respect for the frontier, but propaganda and subterranean warfare could continue no less actively beyond it.

Religions of this kind acknowledge no frontiers. Soviet Russia is merely the geographical center from which communist influence radiates; it is an ‘Islam’ on the march, and it regards its frontiers at any given moment…[I]t is not the first empire in which the temporal and public power goes hand in hand with a shadowy power which works outside its imperial frontiers to undermine the social structure of neighboring States. The Islamic East affords several examples of a like duality and duplicity. The Egyptian Fatimids, and later the Persian Safavids, were the animators from the heart of their own States, of an active and organizing legend, an historical myth, calculated to make fanatics and obtain their total devotion, designed to create in neighboring States an underworld of ruthless gangsters. The eponymous ancestor of the Safavids was a saint from whom they magically derived the religious authority in whose name they operated. They were Shi’is of Arabian origin, and the militant order they founded was dedicated to propaganda and ‘nucleation’ throughout the whole of Persia and Asia Minor. It recruited ‘militants’ and ‘adherents’ and ‘sympathizers’. These were the Sufis. As rulers their sympathies were recognized by other sovereigns in the same way that Stalin, head of the State, is recognized by other heads of States, and rightly, as the leader of world communism. More here.