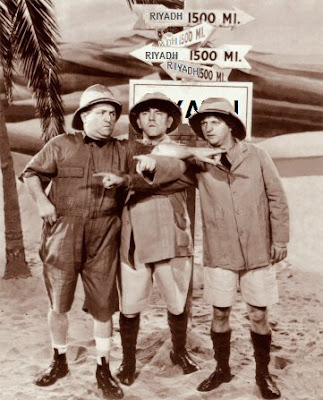 There, there, no thereWhat they need is GPS, you know, that infidel technology. KGSSaudi Arabia’s Mosques Don’t Point To Mecca

BIG news from Saudi Arabia that around 200 mosques in Mecca, point the wrong way for prayers. All mosques have a niche aligned to the direction of the Kaaba, in Mecca’s Grand Mosque. But many are not aimed as they should be.As the crow flies, many Muslims appear to have been targerting their prayers towards a Mr Suleman’s House of Falafal. Others are praying to a municipal swimming baths, a silver-blue Ford Cortina that has been parked in the same spot since last November or New York. Tawfik al-Sudairy, Islamic affairs ministry deputy secretary, tells pan-Arab newspaper al-Hayat:“There are no major errors but corrections have been made for some old mosques, thanks to modern techniques. In any case, it does not affect the prayers.” Now that it matters not which way the believer faces, there is the chance for a Mecca franchise in your locale, which should reduce journey times for pilgrims and open up a new wave of naming rights and opportunities in feng shui…

Henrik Comments: “Regarding the Quibla (prayer direction) all mosques built in the 7th century do not point to Mecca, they point to Jerusalem. That is archeological evidence that contradicts Islamic scripture in the worst possible way. Actually there’s one exception to this rule: The oldest mosque in Jerusalem (Dome of Rock, I think), which is completely without direction for prayer.”

They are all loons. Conclusion drawn. KGS