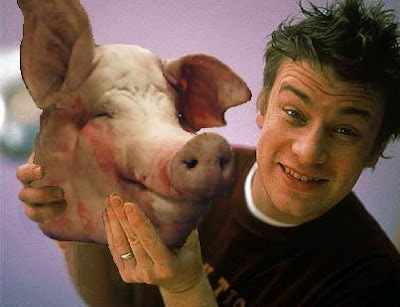 Jamie Oliver: I would rather serve halal to whining Muslims
than cater pork to infidels The problem lie not with allowing for dietary needs, but the imposition of those needs on the non-Muslim participants to the G20 summit. They (whining Muslims) are so intolerant, that they can’t even allow for other people to enjoy eating pork alongside them. That’s the point, and the West shouldn’t cater to their intolerance, something that chef, Jamie Oliver, who promotes UK pork, is completely at ease with. KGSVia Pamela at Atlas Shrugs & Islam in Action:Muslims Get Pork Banned at G20 Summit Banquet

Recently a Domino’s in the UK had banned all pork products to cater to their Islamic customers. Now the Brits have taken this catering to the world stage and have banned all pork products at the upcoming G20 banquet. Of course this was done after it was demanded by self centered Muslims. One cowardly British chef had this to say “It is not an option and you cannot mess about. Britain’s reputation is on the line here.” Pretty pathetic, if you ask me.

Pork is scratched off the menu for Jamie Oliver’s diplomatic dinners
Amar Singh
27.03.09

JAMIE Oliver may have lobbied us to buy British pork but he won’t be serving it to the world’s most powerful leaders at next week’s G20 banquet in Downing Street.

The chef, whose recent TV series Jamie Saves Our Bacon saw him champion pig welfare, has removed pork from the menu of his six-course meal because it could offend Muslim guests.

The Saudi Arabian, Turkish and Indonesian delegations are said to have requested that no pork be served and that halal food is available for leaders such as King Abdullah of the Saudi royal family and Susilo Bambang Yudhoyono, president of Indonesia.

A source close to Oliver, 33, said he was also “working his way through a lengthy list” of dietary requirements for Gordon Brown’s global guest list.

Oliver has spent the past few months ensuring embassies and British diplomats approve ingredients. The source said: “We have a very lengthy list of what certain parties will require and it’s proved quite a challenge to make sure all dietary needs are catered for – but there should be no issues. Certain foods are off the menu based on what has been requested.”

Cyrus Todiwala, a leading chef who is making a lunch for G20 delegation members at Asia House next Wednesday, said: “If you have leaders from Muslim countries such as Saudi Arabia or Indonesia there, then you simply cannot serve pork. It is not an option and you cannot mess about. Britain’s reputation is on the line here.

“Suppliers will have been vetted thoroughly and Jamie’s people would have been working with Downing Street and the embassies for a long time to avoid any issues. Preparing a meal like this is a logistical nightmare. I served 48 Commonwealth heads of state once and every person had a dietary issue.”

Oliver will have a team of 40 at Downing Street including apprentices from Fifteen, the London restaurant he founded to help train underprivileged young people.