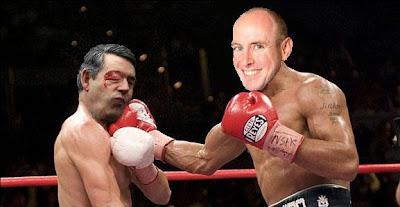 British MEP Dan Hannan’s ‘knock out’ of the UK’s Prime Minister in the European Parliament the other day, is sweeping the globe. Apparently, and rightly so, it has hit a nerve with many in the blogosphere, including the Tundra Tabloids, with a wide circulation of the video.
Boom, socko, blammo, Gordon Brown is down for the count!
H/T: Gaia
MEP Dan Hannan’s ‘Brezhnev apparatchik’ attack on Gordon Brown is a YouTube hit

Daniel Hannan, the Conservative MEP for South East England, publicly lambasted the Prime Minister over his economic record after he addressed the European Parliament on the global financial crisis on Tuesday. With Mr Brown looking on, he told fellow MEPs that Britain was entering the recession in a “dilapidated condition”, with an “almost unbelievable” deficit.
In a blistering riposte to the Premier’s calls for a concerted international effort to tackle the crisis, he accused the former Chancellor of trying to “spread the blame” and called him a “devalued Prime Minister”. The three-and-a-half minute speech, which drew cheers and laughter from fellow MEPs in Strasbourg, was not covered on mainstream broadcasts.
But it was posted on the video sharing website YouTube shortly after the sitting and attracted 90,000 viewers within 24 hours after being picked up by US news outlets and political blogs. In the most critical passage, he told the Prime Minister:
“When you repeat, in that wooden and perfunctory way, that our situation is better than others, that we are well placed to weather the storm, I have to tell you, you sound like a Brezhnev-era apparatchik giving the party line.
“You know and we know, and you know that we know, that it’s nonsense.”

Here it is again:

But it doesn’t end there, MEP Hannan was on the Fox News channel with Glenn Beck

Glenn Beck: …we are in a better position than England, but it’s because you’ve had socialism for so long, we’re now walking through that door like it’s the answer to cancer, it’s a nightmare. Could you please explain what’s in our future if we don’t turn around now?

MEP Dan Hannan: Yeah I love this show, I wish we had TV like this in the UK, you would never get a question like that on the BBC, it’s just unthinkable. The truth is exactly what you say, we’ve had socialism for ten years, and what this meant, that during the good years, during the years of low inflationary growth, when there was low unemployment and there were big tax receipts, you know what, we increased the deficit. We borrowed more and more every year, so when the tough times came, we had no margin, we had no leeway….we blew it all away.

Glenn Beck: But we were too, the Republicans were taking us down this road, just slower than we’re going now, but now we have a congress and a president that say they are going to create jobs by the government spending money. Could you help us out for Americans who are like “Oh that sounds like a good deal”, could you help us out on how well it’s worked in England?

MEP Dan Hannan: Yeah, well I mean what happens, is that you create all these, what they call government jobs, but which are not really jobs what you or I would understand the word. These are not public sector jobs, of policeman or fireman or nurses or teachers, these are you know, liaison officers, outreach workers, local government officials and racism awareness councillors and this great kind of apparatus of the Quango state (Quasi Autonomous Non Governmental Organisation).”

There you have it folks, the exact detailing of what ails many Western governments, and now they are trying to pull the wool over our eyes once again, but this time on a global scale, using the very same methods and means (socialism) that are driving individual sovereign states into bancruptcy, and done all under the banner of “global governance”. Time for another revolution. KGS