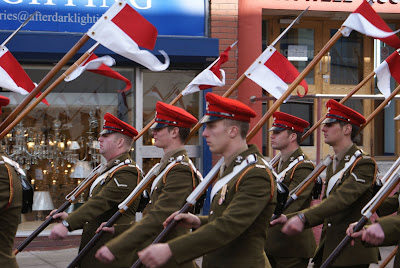 Blogger Aeneas from Beer & Sandwiches was there: “I heard people commenting that the people who had turned out in such large numbers were the silent majority” 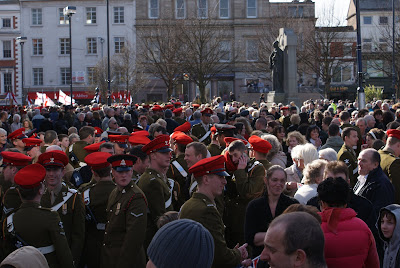 Last week’s outrage in Luton, has been compensated for by a massive show of support by the people of Britain for their troops marching through the streets of Derby England. Aeneas from the Beer & Sandwhiches blog has the full story and lots of pics. KGSROMAN STYLE

The streets of Derby heaved and throbbed today with people who were proud our armed forces and proud to be British. The crowds were so vast and pressed into narrow streets that soldiers could only just pass through the grateful public.

It was like a Roman triumph, as grateful citizens offered their thanks and respect to their conquering heroes. I suspect that many of the soldiers involved in the parade were taken aback by the adulation and by the numbers of grateful citizens packing the streets.It would appear that the Islamists who so disrespected our boys in green in Luton have unleashed the true spirit of the British people who are naturally patient but when pushed too far are magnificent. The passion of the people who lined the streets today was magnificent, and their affection for the British armed forces was very moving.The British people have begun to take the first tentative steps back to self respect and pride in their history, traditions and achievements, as British values were reasserted and renewed on the streets of Derby today. I suspect that the next parade that takes place in Great Britain will be even bigger as more an more people see such an occasion as an excuse to celebrate and assert national identity and national pride. These events are a joy for citizen and soldier alike. 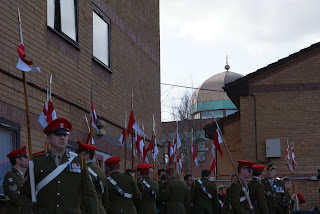 I for one did not see any banners or signs being waved saying “Real Muslims for the British Army”, “Muslims Say Thanks For Protecting British interests In Iraq” or “British Muslims Love The British Army”. It appears that the opportunity to demonstrate fealty to Britain and opposition to sharia law has been well and truly missed. Why is that? At least we didn’t see any organised assembly of the “extreme” Muslims, perhaps they were warned off by their friends in Whitehall who realise that the public mood will not tolerate continued Islamist nonsense. Personally I think the decision was a subtle warning by the British army itself to the Islamists and their friends in New Labour.There were a few Muslims about, though I did not identify any supporting the parade, and a group of them gave me a bit of hassle, saying something about by camera. They stared at me for a while in an aggressive manner but I ignored them as their views are of no consequence to me. In any case it must have been quite galling to them to see that army that many of them despise as an enemy force present in their area of Derby.

The people of Britain can only be pushed so far. It’s something that both, the doughy headed politicians who push multiculturalism and appeasement with Islam, and fundamentalist Muslims along with their silent co-religionists, need to understand. This is not a one time thing, the British people will indeed galvanize together and put an end to the bastardization of their society when forced to do so, they can only be pushed so far. KGS