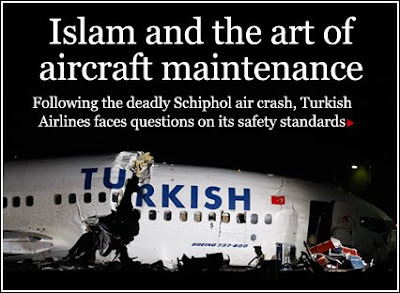 Workers sacrificed a camel after getting rid of a troublesome batch of planes
This is as bad as it gets. KGS
“He reiterated the claim that cronyism – and ostensible piety – seemed to govern hiring decisions. “During former managerial times we had Christmas parties. Now in that department they’re praying with copies of the Koran. The management building now contains significantly more people who are praying, especially on Fridays. “When they go for the noon prayer, they don’t sign themselves out, even though you’re supposed to do that even if you go to the bathroom.”
H/T Baron Bodissey
Islam and the Art of Aircraft Maintenance

Immediately after the accident, European Commission Vice President and Commissioner for Transport Antonio Tajani, who is Italian, declared that Turkish Airlines had always had good safety and security inspection results.

The investigation is not yet complete, and it is premature categorically to assign blame for it. But confident assertions that there is no cause to be concerned about the safety standards at Turkish Airlines are equally premature.

The Islamic AKP has packed the airline with political and religious allies
There have over the last few years been numerous accounts in the Turkish press of serious discontent among Turkish Airlines’ employees with the company’s new managerial cadre. Employees have come forward with claims that Turkey’s governing AKP, a party associated with political Islam, has packed the airline’s management and staff with unqualified political allies and co-religionists.

The AKP came to power in November 2002 and appointed the new THY management in 2003. The most serious charge – made by senior pilots, union officials, technicians and cabin crew, both on and off the record – is that new managerial policies have encouraged lax standards of aircraft maintenance and the hiring of unqualified staff.

Indeed, according to a story published last autumn in Turkish Forum, a serious and respected online publication, the Turkish Pilots’ Association had warned the Civil Aviation Authority, and other relevant ministries and international bodies of their concerns.

On the one hand, these reports must be treated with some scepticism: they have appeared in the notoriously partisan Turkish media in the context of a bitter dispute between Turkish Airlines’ management and the Turkish Air Workers Union, not to mention in the context of the exceptionally savage and frequently paranoid feuding between the AKP and its secularist rivals. On the other hand, it seems reckless simply to dismiss these claims out-of-hand. MORE HERE.