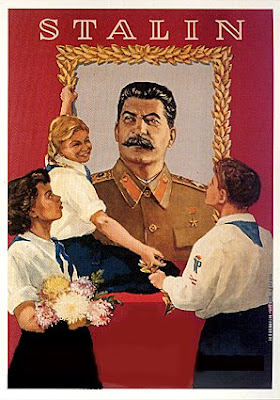 Radical Stalinism was a problem,
but moderate totalitarianism was not the solution
The West has a dilemma with Mr.Geert Wilders, what are they to do with the Dutch politician who continually upsets the European elite’s multicultural applecart? To debate him on the issues of Islamization, is to invite further public approval for his views, to try an silence his warnings about Islam and the dangers it poses to our Western way of life, can only be done at the expense of free speech and thus, rally more people to his cause. Again, what to do?
Well perhaps as a result of the dilemma, the unthinkable might begin to happen, that those who have been Geert Wilders’ greatest of critics, will begin to take to heart the soundness of the Dutch politician’s message. The problems that the West faces vis-a-vis the Islamic world, stems not from radical extremists that have “hijacked the religion of the Muslims’ prophet, but from Islam itself, that is pregnant with the notion that “their time has come”, which spans not only the Sunni-Shiite divide, but history as well.
Finding a moderate Islam where none has existed is like trying to locate the breading ground for the mythical unicorn, it’s something that should be stopped, immediately. Andrew Bostom takes the time to illuminate the reasons why in his most recent post, please take the time to read it in full, Bostom has the goods in full. KGS
Geert Wilders and Totalitarian Islam

I have nothing against the people. I don’t hate Muslims. But Islam is a totalitarian ideology. It rules every aspect of life – economics, family law, whatever. It has religious symbols, it has a God, it has a book – but it’s not a religion. It can be compared with totalitarian ideologies like Communism or fascism. There is no country where Islam is dominant where you have a real democracy, a real separation between church and state. Islam is totally contrary to our values

Wilders remained steadfast, dismissing Jacoby’s invocation of the hollow, if oft repeated trope “radical Islam is the problem, and moderate Islam is the solution.” This tired mantra—reiterated constantly for the past decade without a scintilla of supportive evidence—is defied by hard polling data from 2006/2007, and their most recent follow-up reported February 25, 2009. Overwhelming Muslim majorities i.e., better than two-thirds (see the weighted average calculated here) of a well-conducted survey of the world’s most significant, and populous Arab and non-Arab Muslim countries, want these hideous, immoderate outcomes: “strict application” of Shari’a, Islamic Law, and a global Caliphate.

Specifically, the World Public Opinion.org/ University of Maryland poll (released February 25, 2009) indicated the following about our erstwhile Muslim ally nations of Egypt and Pakistan: 81% of the Muslims of “moderate” Egypt, the largest Arab Muslim nation, desire a “strict” application of Shari’a, Islamic Law; 76% of the Pakistan’s Muslims—one of the most important, and sizable non-Arab Muslim populations—want this outcome. Furthermore, 70% of Egyptian Muslims and 69% of Pakistani Muslims desire the re-creation of a “…single Islamic state or Caliphate.” Earlier, I detailed the totalitarian impact of these fulfilled Islamic desires —based upon their doctrinal and historical application, across space and time.

Jacob Burckhardt (d. 1897), an iconic figure in the annals of Western historiography, believed it was the solemn duty of Western civilization’s heirs to study and acknowledge their own unique cultural inheritance—starting with the culture and heritage of classical Athens. Burckhardt emphasized how the Western conception of freedom was engendered in Athens, where its flowering was accompanied by the production of some of history’s most sublime literary and artistic works. Moreover, while Burckhardt affirmed the irreducible nature of freedom, and upheld equality before the law, he decried the notion—a pervasive, rigidly enforced dogma at present—that all ways of life, opinions, and beliefs were of equal value. Burckhardt argued that this conceptual reductio ad absurdum would destroy Western culture, heralding a return to barbarism. And contra the Western legacy of Athens—epitomized by freedom—Burckhardt referred to Islam as a despotic, or in 20th century parlance, totalitarian ideology.

All religions are exclusive, but Islam is quite notably so, and immediately it developed into a state which seemed to be all of a piece with the religion. The Koran is its spiritual and secular book of law. Its statutes embrace all areas of life…and remain set and rigid; the very narrow Arab mind imposes this nature on many nationalities and thus remolds them for all time (a profound, extensive spiritual bondage!) This is the power of Islam in itself. At the same time, the form of the world empire as well as of the states gradually detaching themselves from it cannot be anything but a despotic monarchy. The very reason and excuse for existence, the holy war, and the possible world conquest, do not brook any other form.

The strongest proof of real, extremely despotic power in Islam is the fact that it has been able to invalidate, in such large measure, the entire history (customs, religion, previous way of looking at things, earlier imagination) of the peoples converted to it. It accomplished this only by instilling into them a new religious arrogance which was stronger than everything and induced them to be ashamed [emphasis in original] of their past

G.H. Bousquet (d. 1978), one of the foremost 20th century scholars of Islamic Law, explained how Islam’s unique institution of jihad war, and its eternal quest to impose the Shari’a on all of humanity, represented the quintessence of Islamic totalitarianism. Writing in 1950, Bousquet further warned that these ancient Muslim doctrines remained alive, and relevant to the modern era.

Islam first came before the world as a doubly totalitarian system. It claimed to impose itself on the whole world and it claimed also, by the divinely appointed Muhammadan law, by the principles of fiqh, to regulate down to the smallest details the whole life of the Islamic community and of every individual believer…Viewed from this angle, thestudy of Muhammadan Law (dry and forbidding though it may appear to be to those who confine themselves to the indispensable study of the fiqh), is of great importance to the world of today.

Robert Conquest, in the Preface to the 40th Anniversary Edition of The Great Terror, his seminal indictment of Soviet Communist state tyranny under Stalin, observed:

One of the strangest notions put forward about Stalinism [substitute Islamic Jihadism] is that, in the interests of “objectivity” we must be—wait for it—“non-judgmental.” But to ignore, or downplay, the realities of Soviet [substitute Islamic] history is itself a judgment, and a very misleading one. Let me conclude with Patrick Henry saying in 1775, “I know no way of judging of the future but by the past.” The corollary is that misreading of the past incapacitates us as regards our understanding of the future—and of the present too.

I have indicated above, in brackets, where one could readily substitute Jihadism for Stalinism, and Islamic for Soviet.