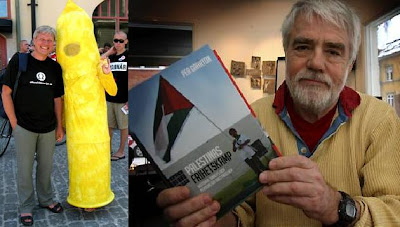 Lars Ohly and Per Gharton turn 6000 demonstrators into rioters

Both Lars Ohly and Per Gahrton will claim that they tried to keep the crowd calm, but their rhetoric was more than enough to inflame the crowd’s hatred towards Jews. These two really scrape the bottom of the barrel. Real scum bags.

The Tundra Tabloids good friend Ilya Meyer has just recently published a post on his experiences at the Malmö Davis Cup tennis tournament, and on the subsequent riots and mayhem that took place outside the sporting event.

Ilya Meyer spoke with a number of people at the event: “police officers, civilian security guards, passersby, fans of both the Swedish and the Israeli teams, and representatives of the Israeli team.” The stories they told him offer a window into what really happened, when a handful of Israeli tennis players dared to set foot into the occupied territory of Malmö.

Ted Ekeroth’s video shows Muslim Arabs chanting a phrase ending with..Yahud, (Jew). Who says the Arabs’ conflict is only with the Zionists? These people hate Jews, get it?

[…] The demonstrations were against the enormity of allowing a handful of Jews onto Swedish soil to play tennis. Because the police, in particularly unsportsmanlike fashion, erected barricades and refused to let the demonstrators tear the Jewish tennis players limb from limb, the mob turned its attention on the hapless officers. Sitting inside their vehicles, the police were subjected to what could only have been a truly terrifying rampage as fireworks, granite cobblestones, even bicycles, were hurled at them and the rioters started tearing the vehicles apart.

I spoke before and after the tennis match with police officers, civilian security guards, passersby, fans of both the Swedish and the Israeli teams, and representatives of the Israeli team. Everyone expressed their disapproval of the demonstrators’ goals, their methods and the damage they caused to Sweden’s and in particular Malmö’s reputation.

I met a number of very pleasant police officers from my home town of Gothenburg, about a 3-hour drive away. They all said the police were thoroughly prepared and that nothing would disrupt the match. They were right – because they themselves bore the brunt of the attack by the rioters.

All the police and functionaries I spoke with noted that Sweden’s reputation, economy and sports industry and the city of Malmö’s future as a host of international events have taken a severe beating – just like the city itself.

The Israeli team members expressed their astonishment over the situation. One player said that they travel the world playing tennis, including the Middle East, but that nowhere have they ever encountered the sort of hatred and naked anti-Semitism that they witnessed in Sweden.

Another player said that one might have an opinion on the policies of countries such as China, Russia, Dubai, Turkey, countries about which there is some controversy regarding human-rights issues and political freedom, but that one leaves politics behind when the time comes to play tennis.

Another team member who understands Arabic pointed out that the protests did not appear to be political in nature but instead racist. He did not understand how Sweden, previously a renowned beacon of freedom and democracy, could accept being taken hostage by what looked like race riots.

After the match I chatted with a few Swedish tennis fans, young enthusiasts in their early 20s. One of them was immensely upset over Sweden’s loss. Not quite sure if I’d misunderstood what he said, I pointed out that Sweden had in fact won the doubles match. “Yeah well, we won the match but we lost everything else,” he said, pointing to what looked like a war zone beyond the crowd control barricades, the hundreds of police in riot gear, the dozens of civilian security personnel and the scores of police vehicles. “We’re supposed to call this winning?” he asked. “Sweden lost big-time. Tennis lost its reputation. And as for this damned city, I’m never setting my foot here again.”

A functionary standing nearby nodded without saying a word. The battle-weary police nearby looked like all they wanted to do was to go back home to their families in faraway towns and cities like Stockholm, Gothenburg and points further afield. A few of them undoubtedly came locally, from Malmö. I felt most sorry for them – it’s never pleasant hearing your home-town being trashed in public.

But it is difficult to talk about victory on a day like this. How could Sweden lose in such a spectacular way? The answers are to be found in the left-wing politicians who fired up the 6000-strong demonstrators, turning them into rioters.

Swedish politicians Lars Ohly and Per Gahrton are the flip side of an increasingly fragile Swedish democracy. Populists who know how to use words to inflame a crowd on the day the country’s Davis Cup team won but the nation lost.