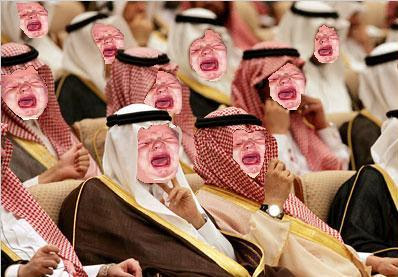 I first got wind of the Muslim world being insulted by the ICC decision at Jihad Watch, and then after looking around, I find out that Qataris are as disappointed with the ICC’s decision as the Iranians are!

DOHA, March 5 (KUNA) — The State of Qatar voiced on Thursday “deep regret” over the arrest warrant issued by the International Criminal Court (ICC) for Sudanese President Omar Hassan al-Bashir on Wednesday.”The ICC arrest warrant is by no means conducive to security and stability in Darfur region, west Sudan,” Qatar News Agency (QNA) quoted a Foreign Ministry official as saying.”The move could only hamper the Qatari efforts aiming to stabilize the troubled region in cooperation with the Arab League, the United Nations and the African Union.
More!
Al-Attiyah warns of serious consequences of the ICC’s decision
against President al-Bashir
Riyadh, (SANA)- Secretary-General of Gulf Cooperation Council (GCC), Abdul-Rahman Bin Hamad Attiyah, has expressed his deep regret over the International Criminal Court decision against Sudanese President Omar Hassan al-Bashir warning of its serious consequences on peace process in Darfur . In an exclusive statement to Qatar News Agency /QNA/ al-Attiya pointed out that in accordance with international justice and statues of International Criminal Court ,the Prosecutor should take a legal and moral attitude represented in same current measures based on the court system against flagrant war crimes and gross violations of International Humanitarian Law committed by Israel against Palestinian people and those committed by America at Abu- Ghraib prison in Iraq.