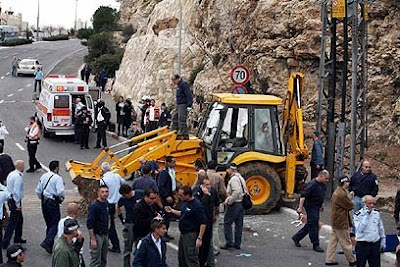 Make the controls too sophisticated for pali morons to operate them

A Palestinian driver rammed a bulldozer into a bus and a police car on a Jerusalem highway Thursday, lightly wounding two officers before he was shot dead – the latest in a string of attacks by Palestinian terrorists using heavy machinery against Israeli civilian targets.

Witnesses described a harrowing sight of the towering yellow front loader speeding along the highway, dragging the police car, flipping it into the air and trying to crush it with its front shovel.

There was no immediate claim of responsibility or details of the man’s identity.
One witness, a taxi driver identified as “Dor,” told Israel Radio that he chased the driver as he witnessed the attack.

Taxi driver Dor: “I saw the police car fly into the air. He flipped it over twice, then continued dragging it toward a bus that was stuck in traffic,” he said. He told the station that he had fired four shots at the man, wounding him. “Then a policeman came with his M-16 and finally finished him off,” he added.

How many times does this make for a bulldozer being used in a Palestinian terrorist attack, 3-4? The security fence proves that the Palestinian terrorists have been beaten, they have to resort to using earth moving machines to carry out their crazed Islamic suicide attacks. Thankfully civilians carry weapons, the carnage could have been much much worse. I like the part where he says: and thepolicman with his M-16 finished him off. Well done. KGS