Skip to content
Home
/
2009
/
March
/
4
/
Uncategorized
/
Yemen: A Den of Fanaticism and Terror…….
Facebook
Twitter
Google+
LinkedIn
Pinterest
You know when things are bad, when your government has to depend upon “loyalist jihadists” in order to survive. 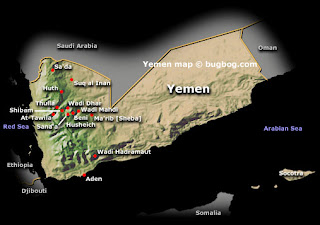 In Yemen, being an al Qaeda operatives wins you a state job, cash payments, cars, and land! Yemen: New terror camps as a city falls to jihadsist

In January, Yemeni President Ali Abdullah Saleh asked his network of loyalist jihadists to prepare for offensive operations against domestic “enemies of the state.” In return, Saleh has ceded authority to fundamentalist fanatics who seek to impose a neo-Salafi theocracy in the religiously pluralistic country. It is unclear if this is the full extent of the quid pro quo.

For nearly a decade, Yemen’s counter terror strategy has hinged on deal-making with Yemen’s jihadists. Counter terror operations are sporadic and often driven by US or Saudi intelligence. President Saleh has negotiated agreements whereby hundreds of militants’ jail terms were suspended in exchange for a loyalty pledge. Convicted and suspected al Qaeda operatives were given state jobs, cash payments, cars, and land.

High-profile terrorists have repeatedly broken out of jail and then were pardoned for their original crime as well as the escape. This is Yemen’s terrorist rehabilitation program, and these appeasements are staunchly defended by Yemeni officials as necessary to gain intelligence and ensure security. Recently, however, Saleh began to activate this army of militants to target his political foes.

Saleh faces crises on two fronts. A southern populist uprising in the six governorates of the former People’s Democratic Republic of Yemen has taken on separatist overtones. At the same time, the northern Saada war with Zaidi Shiite rebels may erupt for the sixth time since 2004. Saleh has deployed jihadists as a paramilitary against the northern rebels since 2005.

Facing threats in the north and south, and an increasingly poverty stricken and desperate nation, Saleh has embarked on a strategy of empowering Islamic militants who, in exchange, have been given a free hand over some local populations.

At a meeting in late January, Tariq al Fahdli headed a large delegation of “reformed jihadists” who met with President Saleh in Sana’a. Al Fahdli is a bin Laden loyalist and former al Qaeda operative. He is an in-law of Brigadier General Ali Mohsen al Ahmar, Saleh’s half brother.

Fahdli is thought complicit in al Qaeda’s first operation against the US, the 1992 hotel bombing in Aden that targeted US troops. Khaled Abdul Nabi, head of the reportedly defunct Aden Abyan Islamic Army, was in attendance as well. At the meeting, Saleh asked the jihadists to ensure the stability and unity of the state by mobilizing against his domestic opposition.

The next week, security officials released over a hundred militants from jail including dozens of al Qaeda operatives. Al Fahdli asked for YR five million and settled for a three million riyal budget as sufficient to orchestrate the regime’s directives. Militants established several new terror training camps following the meeting.

Al Tajamo Weekly interviewed sources close to the jihadists who said one training camp was founded in Abyan after jihadists “received the green light from Sana’a.” The regimen of weapons training includes preparations for offensive operations as well as target practice. The camp’s schedule includes arduous physical exercises and three daily meals.

In Aden, security sources and local observers informed al Tajamo that a new camp consists of a mosque, a school, and a residential structure in a sparsely populated area. The compound provides terror training and “accommodates the elements that were being smuggled in earlier times to fight in Iraq.” Al Tajamo reported on a third training camp west of Sana’a that indoctrinates hundreds of young mujahedeen in the Wahabi ideology. The Sana’a camp, like the others, is very austere. During the initial 21-day program, trainees are evaluated and screened for endurance and specific talents. Strict security measures at the compound are designed primarily to prevent the recruits from leaving, the paper reported.