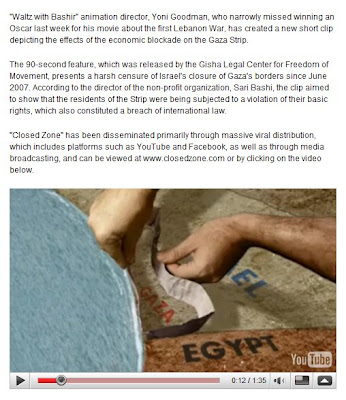 The TT is glad Goodman didn’t win that OscarWords of advice, no matter how much a Jew trashes the Jewish state, it will never be enough for those who hate the Jews. Leftist Yoni Goodman dumps on Israel, in the minute and a half video that shows the desperation of a little boy trapped in Gaza, and yes, he makes it all the Joooos fault.Goodman could have been honest and shown suicide bombers from Gaza ripping apart Israeli buses and blowing up shopping malls, and then show the fencing around the Gaza Strip. How about showing Hamas for the thugs that they are, stealing from their own people, but no, predictably Goodman refrained from casting the Hamas in a bad light. Here is what Debbie Schlussel had to say about his Waltzing with Bashir movie.Schlussel: “And while the foreign language is in Hebrew, it might as well be in Arabic or Farsi. That’s because while neither Ahmadinejad nor the Muslim world could possibly make something more anti-Israel . . . and, frankly, anti-Semitic, they’ll simply love this movie. And that’s why I’m betting on it to win the Oscar. It’s high quality Bin Laden cinema.”OK, now that the Israeli Leftist Goodwin thinks he’s internationally famous enough, he plans to use his craft to promote his twisted version of the reality of the conflict between the Hamas/Palestinians and Israel. Another clueless, shmendrik, and to think that everything he’s doing only benefits Israel’s enemies, so I believe that makes him a traitor as well. KGS‘Waltz with Bashir’ director on GazaWaltz with Bashir” animation director, Yoni Goodman, who narrowly missed winning an Oscar last week for his movie about the first Lebanon War, has created a new short clip depicting the effects of the economic blockade on the Gaza Strip. Yoni Goofman: another self-hating streetwalker for Hamas