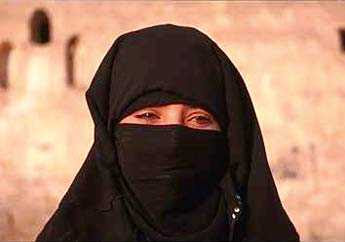 Someone please help meProtecting women from the veilbyHenrik Raeder Clausen

The Islamic veil is probably the most debated piece of clothing on the planet at this moment, and not least whether it is permissible for states to regulate the use of it in certain situations. First things first. The hijab, jilbab, abaya, khimar, niqab, isdal, chador, burqa are all variants to mark women as being pious Muslims according to this Quranic verse: Quran 33:59: O Prophet! Tell your wives and daughters and the believing women that they should case their cloaks over their bodies so that they be recognized as such and not be molested. While other Quranic verses are less clear, the combination of the Sirat (the Islamic accounts of Muhammads’ life) and the Quran shows that the veiling is an explicit Islamic feature, not a retrofitting of patriarchal traditions upon a supposedly liberating religion, and that it is an imposed obligation. It is like this that women will be recognized as Muslims and ‘not molested’. It is also a tool to separate Muslims from non-Muslims.The ‘not molested’ part needs to be taken seriously. In conservative Islamic countries, such as Iran and Saudi Arabia, ‘religious’ police patrol the street and enforce proper Islamic clothing. Many articles, such as this, illustrate what happens to women not toeing the line:Attacks in Tehran on unveiled women. While the veil is supposed to protect women from ‘being molested’, it is taken as a carte blanche by religious radicals to molest women who do not wear it. This makes the veiling, in a very real sense, mandatory. Various countries have different traditions, and largely the most conservative Islamic countries have the strictest dress code for women, as well as the most vicious enforcement. Saudi Arabia, Iran and Afghanistan are leading in enforcing religious clothing. It is often debated whether the veil is voluntary or mandatory. Given a sufficient display of consequences in the form of violent intimidation, women usually adopt it quite willingly. The alternative is certainly more brutal, and thus it becomes an easy choice to wear it. That it also signifies submission to Allah and thus makes the wearer an elevated religious person is an additional bonus.Then, there’s the creepy ‘knock on the door’. According to Danish journalist Ulla Dahlerup, the veil is ‘voluntarily’ imposed by means of sincere Muslims wanting to demonstrate their religious zeal, by visiting families where they have noticed that the wife or teenage daughters are not wearing the veil. The husband is informed that the lack of religious zeal in his family has been noticed, and the visitors firmly suggest him to set the situation right towards his women, that nothing bad may happen to them. This practice of local intimidation is taking place not only in Tehran, Iran, but also in Copenhagen, Denmark, as well as probably in many other cities with a significant Muslim population. It is hard to document, for no writing is involved and the involved parties agree that it is ‘voluntary’ and that the threats are benign.Different styles of Muslim headscarf are on display at BBC.